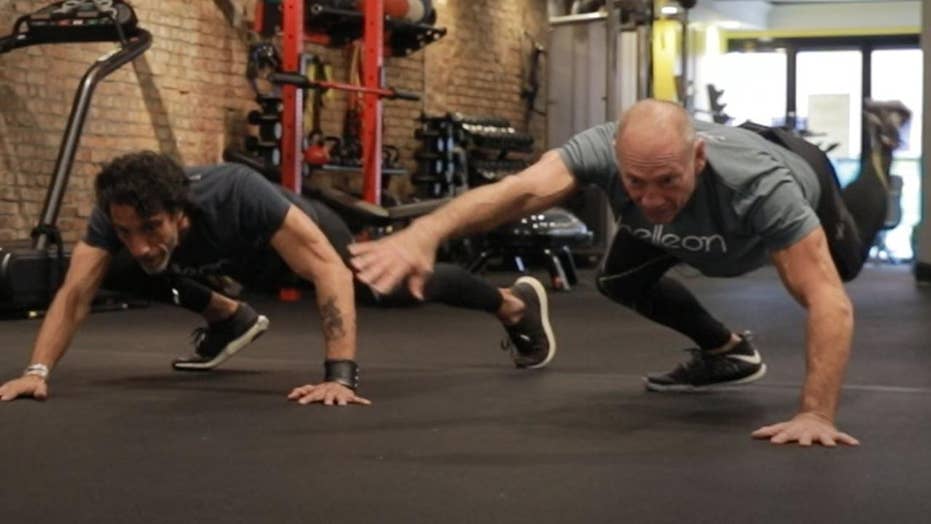 Fitness may not come to mind when you think of monkeys, lizards, crabs, and fleas. Those creatures, however, provide inspiration for a unique, full-body workout for the founders of Belleon Body, Jeff Bell and Carlos Leon. Watch a break-down of the wild workout and fulfill your New Year’s resolution to get fit and healthy.

One in three Americans would give up sex for a year to instantly reach their fitness goals, according to new research.

That's not all they'd be willing to do — a survey of 2,000 Americans found a quarter of respondents are so desperate to reach their fitness goals that they would even be willing to spend a week in jail to achieve them in the blink of an eye.

SINGLE MOM DROPS OVER 150 POUNDS, SAID SHE WAS MOTIVATED BY CRUEL COMMENTS

The study examined respondents' attitudes on fitness, well-being and what motivates them, revealing that 68 percent feel so overwhelmed by maintaining a fitness routine that they would rather avoid starting one altogether. Sixty percent also reported they just don’t know enough about health and fitness to start their own routine.

Conducted by OnePoll on behalf of Freeletics, a fitness and lifestyle coaching app, the survey also found that 67 percent don’t know which healthy habits they should create and maintain in their lives.

One in three Americans would give up sex for a year to instantly reach their fitness goals, according to new research. (SWNS)

It turns out social media is actually playing a large role in motivating Americans to exercise; just over three-quarters of respondents reported following fitness influencers to keep them going. Another 85 percent of respondents said they motivate themselves by comparing their progress through photos and measurements — and even selfies.

Despite these motivators, respondents admitted to some common reasons to justify not exercising or maintaining healthy habits.

Topping the list of excuses was the classic “I don’t have enough time” (35 percent), while 26 percent of respondents also reported that they worry they may be past the point of no return — saying they’re just too unfit already.

A quarter of those surveyed also said they’re too stressed to exercise and maintain healthy habits.

This seems to be a trend, as respondents reporting feel stressed an average of three days per week. A whole 11 percent of respondents even said they felt stressed five to six days a week.

Americans are more frequently taking action to combat their stressors, however, as respondents reported that they meditate an average of 4.6 hours a week. Sixty-five percent reported that practicing mindfulness and meditation is a top priority for them.

The majority of respondents claimed that practicing meditation and mindfulness is a priority. (SWNS)

However, one of the top barriers to practicing mindfulness was a busy and distracted mind (47 percent).

‘‘It’s important to find an exercise routine that works for you and your schedule, but it’s equally as important to train your mind, too. If you reduce stress and sleep better, you’ll also perform better," said Dr. Peter Just, Team Lead Coach Experience at Freeletics, of the results.

See below for more results from the study.

Top 5 Excuses to Not Exercise or Maintain Healthy Habits

Top Things People Would Do to Instantly Complete Their Fitness Goals