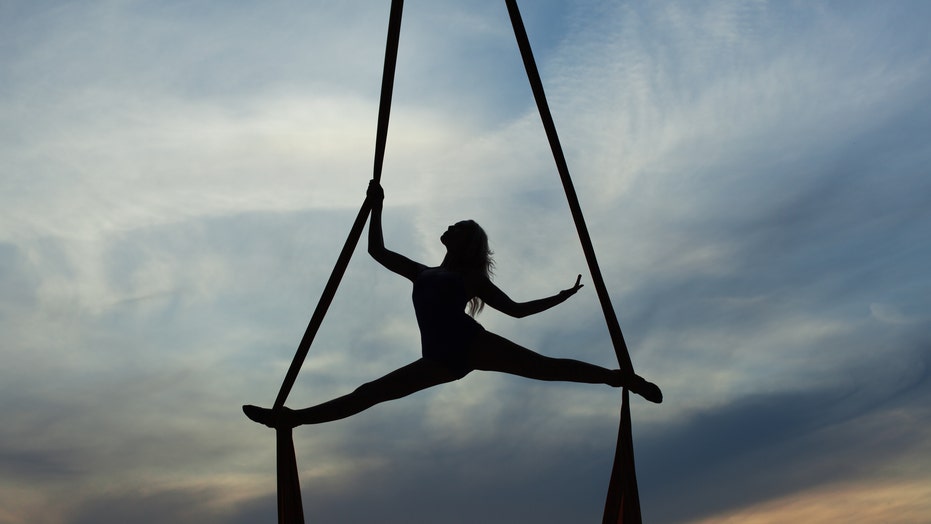 The pandemic has stranded Cirque MonteCarlo, a circus started in Italy that was beginning its first tour in the United States. The circus was able to perform 7 weeks of a cross country 11 month tour, but now they are practicing and living in a parking lot waiting for the green light from the government.

As if the coronavirus pandemic wasn’t enough of a circus already.

An enterprising Polish aerialist has managed to both pass the time and sharpen her skills during lockdown by practicing her gravity-defying feats at home in Las Vegas.

Since performers around the globe have been sidelined, with circuses canceling shows over COVID-19 concerns, Aleksandra Kiedrowicz has been posting her tricks on social media for her fans.

In an impressive montage, the 25-year-old performs her high-flying routine using everything from cars to teacups. In one shot, the Season 8 winner of “Poland’s Got Talent” can be seen making herself a mug of coffee using only her feet while contorted on the counter in an awkward crab position.

Another shows Kiedrowicz — known on social media as Flexy Alex — doing splits between a parked car and one driving in reverse, like the modern equivalent of the rack.

Needless to say, the social-media masses have been applauding the acrobat’s impromptu displays.

“I could watch this for days,” commented one fan on an Instagram video of Kiedrowicz busting out a spine-bending routine on top of a car.

“Oh my goodness! I’d get sick!” said another of a clip of her spinning while dangling precariously from chains attached to her ceiling.

This isn’t the entertainer’s first rodeo — er, circus. Kiedrowicz has strutted her stunts for places like Cirque Paris and Italy’s prestigious “Alis” show by Le Cirque: World’s Top Performers, according to her Facebook page.

She also appeared on both “America’s Got Talent” and its British counterpart as half of a knife-throwing duo with her now-fiancé, Alfredo Silva, The Sun reports.

Of course, Kiedrowicz’s isn’t the only entertaining work-from-home video out there. Dancer Conor McKenzie went viral in April after performing an elaborate runway show while wearing only a blanket.