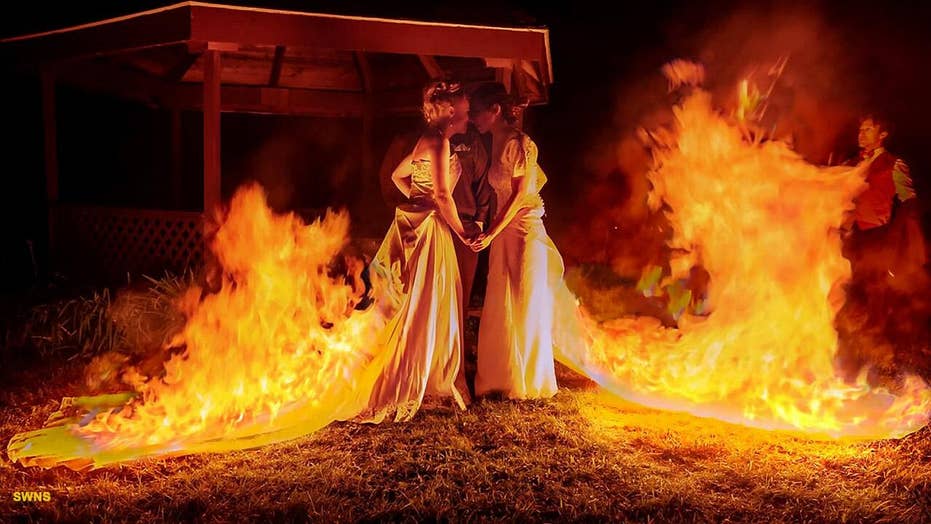 Two brides set their dresses on fire while wearing them

On their wedding day, two adrenaline junkie brides who happened to be variety entertainers set their dresses on fire after walking down the aisle.

This is the spectacular moment two adrenaline junkie brides set their dresses on fire after walking down the aisle.

April Choi, 32, and Bethany Byrnes, 28, enlisted guests from their wedding parties to torch the gowns while they were still wearing them. Dramatic footage shows flames engulfing the dresses, which were specially altered to make the trains detachable.

The couple, who are both variety entertainers and boast fire-eating and breathing among their talents, pulled off the stunt during their wedding on Oct. 13.

They organized the day in reverse, starting off with their reception in the afternoon before saying their vows at sundown, at Camp Tanager in Mt. Vernon, Iowa.

When darkness fell, the brides, who wore different gowns to say their vows, went outside and held hands as their stunt dresses were doused with fuel. They went up in flames seconds later, after two guests set them alight with torches upon on the cue: "You may now light the brides."

COACH ANNOUNCES IT WILL GO FUR-FREE BY FALL 2019 COLLECTION

"We tried to get them to match evenly but mine ran up first and Bethany's took a while but it slowly burnt up the skirt. I think Bethany managed eight seconds in hers and mine was 12 seconds before I had to drop it.

"I have never seen two brides do something like this. I don't know of any other person who has actually burnt their wedding dress at the wedding. don't think I will ever forget it and nor will anybody else who attended the wedding, especially our parents who were greatly concerned for our safety. They were very very nervous," she said.

Byrnes added: "I was super nervous. I have done fire performance for fun and professionally, but as I watched the fuel being poured on April's dress I couldn't help but think it was a ton of fuel to be wearing."

"It was such an adrenaline rush when the dresses went up in flames. You just have to repeat in your head that it's fine, you've done this before and all of the safety has been figured out. It really is safe. You just have to feel the heat on your back and judge from experience when you need to ditch," she said.

"I love the photos so much. They're glorious. Watching the flames creep up your wife's gown is not something you can ever forget."

Despite critics on social media saying the stunt looked unsafe, the newlyweds, who bought the gowns from a thrift store, say they took various safety precautions.

Because so many of their friends work in the entertainment industry, their guests included eight fire performers and a certified pyrotechnic. There was also a medic in the crowd, and the couple took other steps to ensure the stunt was safe, including wetting the ground and having fire extinguishers on hand.

To ensure their skin wouldn't burn, the brides wore cotton leggings to protect their legs and tied back their hair. They also attached slow-burning duck cloth canvas to the trains of the dresses, which had been cut off and sewn back on to ensure they could tear away easily.

"Every single thing we could think of that could possibly go wrong, we had contingency plans," said Choi.

"I'm ecstatic with the photos. I wasn't sure how it would work out, but it worked out beautifully."