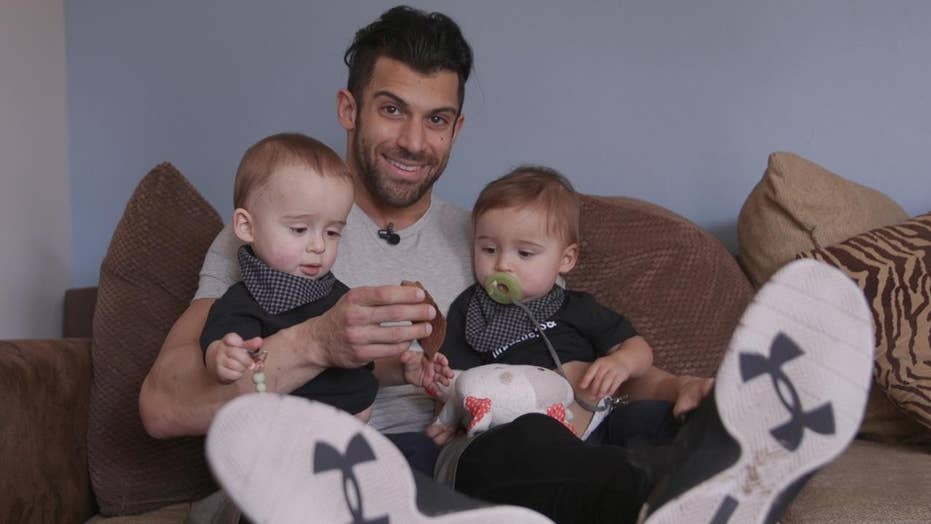 Wrestler avoids the ‘dad bod’ with these daddy-and-me exercises

Professional wrestler Rob Strauss or better known as “Robbie E.” knows a thing or two about staying fit. That’s why this father of 15-month-old twin boys avoids the dad bod by combining play time with pump time, and uses his 20-pound sons as weights.

To keep up with his wrestling schedule, the 5'11, 200-pound wrestler from the Jersey Shore went to the gym almost every day and attended a variety of cardio classes to mix it up.

But today, he has a few new obstacles to get by before he can pump iron: his adorable 15-month-old twin boys, Cash and Carter.

“Obviously, with two kids I can’t drive to the gym whenever I want and stay there for three hours,” Strauss told Fox News. “But going into having kids, me and my wife basically said that we're not going to change anything we do. We want to be role models and still live a fit life."

However, as many parents can attest to, finding an hour or even 30 minutes to exercise can be challenging.

The “dad bod” term has been trending over the last few years, with some defining it as fathers being five to 15 pounds heavier than they used to be before kids arrived, or a “balance between a beer gut and working out,” as  Clemson University sophomore Mackenzie Pearson described it.

While the dad bod trend has officially taken over the Internet with hundreds of thousands of #dadbod posts, being a dad is no excuse not to workout, Strauss said.

"Their excuse is, ‘Well, I have kids, so if I have any free time, I want to spend it with my kids.’ But you really only need 20 minutes a day to sweat or get a pump in, so at least you’re doing something,” he said.

That's why Strauss came up with his own hashtag, #DadBodDestroyer, a name he likes to go by while he works out, using his 20-pound sons as weights.

“So there’s no excuse," he concluded. "While you have that little time after you come home from work or you’re playing with your kids, just curl them or squat them. And they love it, because they’re getting tossed around in the air.”

Start by holding your baby in a cradled position. Then squat down until the tops of your thighs are parallel to the floor. Push your body up from the squat as you press the baby up, directly above your shoulders. Lower your baby back down and repeat for five sets, 20 reps each set, totaling for 100 reps.

Stand with your feet shoulder width apart, and one foot slightly forward. Hold your baby vertically behind your back by his or her upper body or at their armpits. Then press your baby up over your head until your arms are straight, with your elbows in and your biceps next to your ears. Bend your elbows to lower your baby back down behind your head until your forearms are parallel to the floor. Pause for one second and then straighten your arms back up for a second round. Do two sets of 10 reps each.

You can start by holding your baby in a sitting position in the middle of your torso or by holding him/her by the waist in a vertical position. Place your feet wider than shoulder width apart while bending your knees slightly. Engage your core and twist your upper body to the left side as far as you can while keeping the lower body still, then quickly twist your body to the right side. Squeeze your obliques on each twist and do four sets of 10 reps.