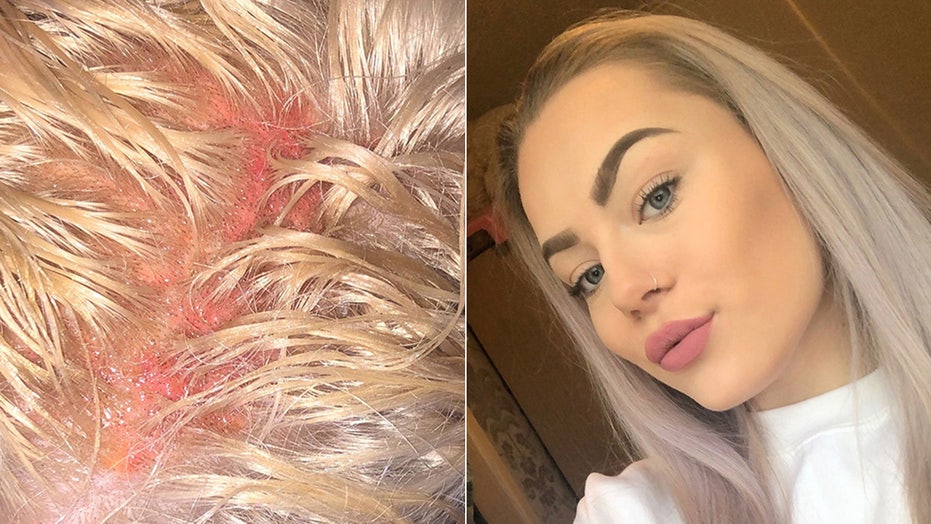 A 19-year-old woman in the U.K. claims that she was left with severe, oozing burns on her scalp after a hairdresser that her friends had recommended told her the pain she was feeling from the bleach was “normal.”

“The hairdresser said: ‘You may get a few blisters but don’t worry, it’s normal,” Jasmine Schofield, who said she paid over $100 to have her hair color lightened, told Metro.co.uk.

Schofield claims she has been bleaching her hair for seven years and could tell the dye job was going wrong just 10 minutes into the May 2 appointment.

Schofield's claims have been refuted by the hairdresser, who has not been identified but said the reaction could have happened with any hairdresser.  (Kennedy News and Media ​​​​​​​)

“She asked me if I was feeling OK and I said, ‘Not really, it’s starting to burn quite a bit,’ then she told me to hold on as long as I could,” Schofield told Metro.co.uk. “She brought me a drink and then I didn’t see her for another hour and 10 minutes. She just left me and I was sat on my own.”

But the hairdresser, who was not named by Metro.co.uk, refutes Schofield’s claims and said she would never leave a customer in pain. She claims Schofield only had the bleach on for 20 minutes and that her body had a reaction to the bleach, which could happen at any hairdressers.

The FDA recommends conducting a patch test before using dye on hair, which could be rubbing some dye on the inside of the elbow or behind the ear for several days to see if it produces a reaction. But the hairdresser pointed out that isn't possible when using bleach.

“She put it across as if she sat in pain. She definitely wasn’t – I would never let anyone sit in pain,” she told the news outlet.

But Schofield claims the burning was so intense that she began pulling out the hair foils herself, and that the blisters started forming in just a few hours. She claims that the hairdresser, who she did not name, said not to wash her hair for up several days, but to try coconut conditioner to soothe the pain.

Schofield said she eventually went to the hospital, where staff said she had “severe chemical burns,” and that they were surprised her hair hadn’t fallen out. She was given burn gel but told the news outlet her scalp is now flaky and she is afraid to dye her hair again.