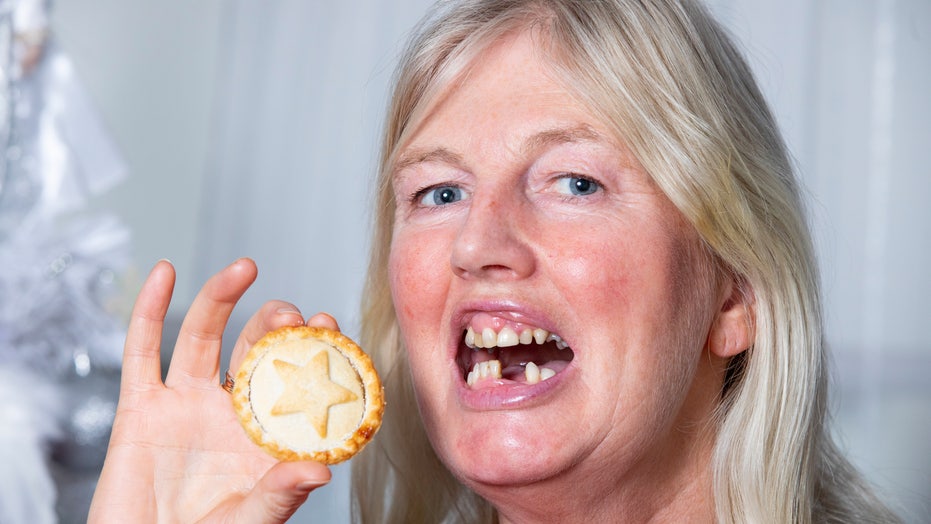 The holiday classic “All I Want for Christmas is My Two Front Teeth” may have been written with schoolchildren in mind, but one woman in Scotland is singing along loudly after she accidentally swallowed her dentures while eating a mince pie.

Angela McGill, who said she thought the hard object she felt in her mouth was a piece of pastry, now has a gap where two of her bottom teeth should be.

“And I was really enjoying my mince pie too, I just got distracted when someone I work with said my name, and I gulped,” the 52-year-old told SWNS. “It was rough, and really hard – I thought it was a tough piece of pastry. Then it went down and got lodged at the back of my throat, and I thought, ‘Oh my God, I’ve swallowed my plate, I’ve literally lost my teeth!’”

McGill said she went to the hospital shortly after where medics advised that the dentures would pass through her digestive system in a few days.

She went to the hospital where scans revealed she had swallowed the false teeth.  (SWNS)

“Obviously I wasn’t going to be using that plate again – like I say, all I want for Christmas is my two front teeth!” she said.

The swallowed pair had been a new replacement for the false teeth she had fitted 40 years ago after a swimming accident, according to the news outlet. Now she’s just hoping to have her third set by the time Christmas arrives.

A man in Kansas had his wish for teeth come true last year after he went viral singing the tune on social media. Evans Kamuru said he lost his front teeth in a present-wrapping disaster when he used his teeth to cut tape and felt something “fly out of my mouth.”

After posting his holiday-spirited plea to Facebook, a secret fundraising effort raised over $14,000 for Kamuru, and he was able to visit a local dentist for implants, Fox 4 KC reported.