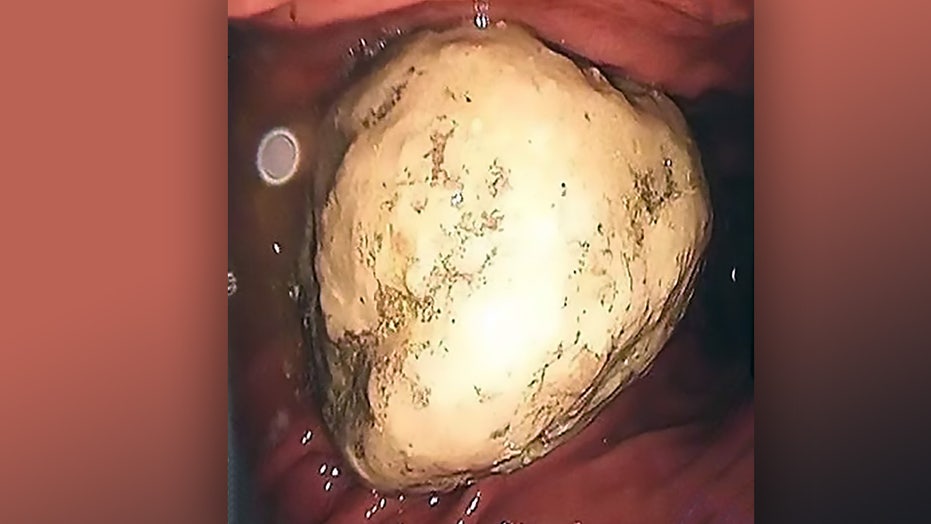 A woman in her 40s who was admitted to a hospital in East China with severe abdominal pains was found to have a 2-inch indigestible bezoar in the middle of her stomach. At first, doctors weren’t sure if the mass was a tumor or another type of blockage because of its large size, according to AsiaWire.

A bezoar is a solid mass of indigestible material that accumulates in the digestive tract, which can cause a blockage, according to the MayoClinic. They typically form in the stomach, but can also appear in the small or large intestine, and affect both children and adults.

The mass was 2-inches in size and was causing the woman severe pain. (AsiaWire)

There are certain risk factors that may make a patient more at risk for developing bezoars, including having gastric surgery, decreased stomach size, diabetes, end-stage kidney disease, and requiring mechanical ventilation assistant to aid in breathing. There are several types of bezoars that are classified based on the materials that form them.

A phytobezoar, like the kind the patient in this case had, is comprised of indigestible food fibers. A trichobezoar is comprised of hair or hair-like fibers, and pharmacobezoars are composed of medications that don’t properly dissolve in the digestive tract.

IS IT SAFE TO EAT ROADKILL?

Bezoars can cause a lack of appetite, nausea, vomiting, weight loss and feeling of fullness, according to MayoClinic. In more severe cases they can cause gastric ulcers, intestinal bleeding and obstruction, and even tissue death in the digestive system.

While they sometimes may pass on their own, other patients may require medication to help dissolve the mass or even surgery. In this case of this patient, who was identified as Ms. Zhang, her doctor first ordered an endoscopy to determine what exactly the bezoar was.

Once her doctor, Zhu Zhen, determined that it was a bezoar, which had formed as a result of her diet consisting of persimmon fruits and crab meat, he prescribed ultrasound shock wave therapy to help break the mass apart, AsiaWire reported.

It was not clear how long the patient was hospitalized for, nor if she was told to stay away from eating persimmons and crab meat.