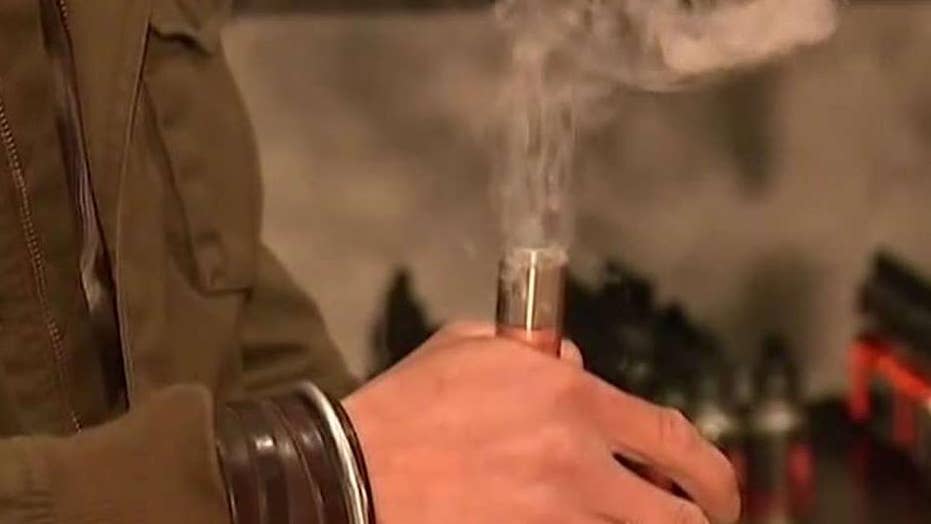 U.S. health officials are investigating whether electronic cigarettes may trigger seizures in some people who use the nicotine-vaping devices; insight from Dr. Marc Siegel, Fox News medical contributor.

Parents who smoke cigarettes typically don’t light up in enclosed spaces like their cars or their homes with children or infants around.

After all, we’ve known for years that secondhand smoke is bad for our health.

But a recent study suggests a lot of parents are unaware those same rules should apply to e-cigarettes too — as secondhand and thirdhand exposure to vaping may also pose health risks.

A research team led by Dr. Jonathan Winickoff, pediatrician and member of the American Academy of Pediatrics (AAP) Section on Tobacco Control, recently looked at how much more likely parents might be to use e-cigarettes in enclosed spaces.

“We knew that the industry messages and advertising about this being a safe product were not true,” Winickoff recently told Healthline. “We wondered whether parents might have been misled and think that these products were safe to use around infants and children.”

And only 21 percent of dual users had policies banning vaping inside the car.

Winickoff hypothesized that parents may view e-cigarettes as safer in enclosed spaces because, “they typically don’t have the foul odor that the cigarettes have and the aerosols become invisible after a few seconds.”

However, the surgeon general has stated that “e-cigarette aerosol is not harmless.”

The dangers of e-cigarettes

Brian King, PhD, Deputy Director for Research Translation in the Office on Smoking and Health at the Centers for Disease Control and Prevention (CDC), told Healthline that verbiage is intentional.

“There’s so much variability in the aerosol, quantifying the specific level of risk is difficult for the individual,” he said.

This is why the surgeon general didn’t specifically state that e-cigarette aerosol is harmful, but rather that it isn’t harmless.

So, what exactly does e-cigarette aerosol contain?

King explained that “the science is still variable.” But he said that what we do know is that the e-cigarettes themselves usually contain nicotine, ultra-fine particles, heavy metals, and even some cancer-causing particulates.

While King acknowledged e-cigarettes are safer than regular cigarette use, “that doesn’t mean they are safe.”

“From a public health stance, there is no reason to not prevent [smoking e- cigarettes] in enclosed spaces,” he said.

Dr. Karen Wilson, AAP spokesperson and professor of pediatrics at Icahn School of Medicine at Mount Sinai in New York City, had some additional concerns for parents to consider.

“When you look at what comes out of electronic cigarettes, it’s not only nicotine, but also other chemicals. And we don’t really know what the negative impacts of those could be,” she explained.

“One thing we do know is that the aerosol drips off and falls to the floor,” Wilson said, citing the science of thirdhand exposure. “You then have the risk of babies crawling around on those floors, picking up those chemicals.”

“For parents to not use these products where their children will be is just really important and kind of common sense,” she added.

This potential is part of what inspired Winickoff and his team to pursue this line of research.

“These compounds can contaminate surfaces and seep into fabrics, making them unsafe,” he explained. “Humans absorb these compounds in three ways: inhalation (breathing), oral ingestion (through house and car dust), and dermal absorption (directly through the skin).”

He worries a great deal about the impact that exposure can have on kids.

“Children ingest twice the house dust of the typical adult, but may weigh a tenth as much. The effective dose of nicotine and toxins may therefore be twenty times higher than for an adult,” he said.

Winickoff warns parents that, “Nicotine is not safe for the developing brain, as it can change the reward pathways, structurally altering how the brain functions.”

He pointed out that previous studies of children and adolescents who use nicotine found that “nicotine exposure can lead to mood disorders, anxiety, and depression. Early exposure to nicotine may prime the brain to make it more susceptible to addiction in adolescence and early adulthood.”

So what exactly does the science say?

The AAP has released data showing that early use of nicotine is related to increased addiction and a greater difficulty quitting.

This is believed to be because of the long-term impacts nicotine use has on the still-developing prefrontal cortex.

However, the research into adolescent impacts of nicotine exposure relates to teens who are actually smoking and vaping themselves, but it’s at least possible that exposure in other ways could have similar impacts.

We simply don’t know enough yet, though research is developing.

The story consumers are told

Nevertheless, the known and potential health risks haven’t stopped the tobacco industry from pushing e-cigarettes as a healthy alternative to smoking.

“The marketing has been that you can use e-cigarettes everywhere,” Wilson explained. “And that’s problematic and concerning because it is creating this idea that what e-cigarettes produce is nothing more than air vapor, and that’s simply not the case.”

Wilson pointed out that there are also other factors that could be influencing some parents’ views on the safety of e-cigarettes.

“I think there are some healthcare providers and physicians who advocate for e-cigarettes because they are a safer alternative to smoking tobacco. And I think when you are promoting that message, it’s easy for people to miss that safer doesn’t necessarily mean safe,” she said.

For parents who are concerned about how their own e-cigarette use may be impacting their children’s (as well as their own) health and are considering quitting, Winickoff points out there is help available.


He suggests calling the quitline (1-800-QUIT-NOW), use smokefreetxt (text QUIT to 47848), and utilize the FDA-approved nicotine replacement products, which include the combination patches and gum.

These products don’t contaminate the environment, can be used indoors, and don’t promote modeling behavior in children who may otherwise be inclined to mimic what they see their parents doing.