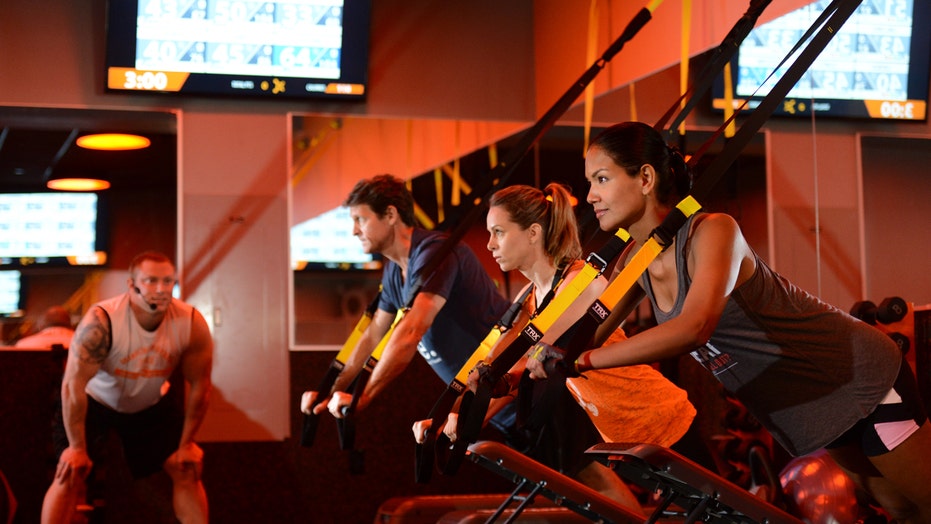 Burn calories all day with this workout

With such a saturated fitness market, it’s easy to see how some people can feel overwhelmed by the choices. At Orangetheory Fitness, members endure a heart rate-based interval workout to boost their calorie burn during and after class

Like many people looking to get fit, 43-year old Colleen Trip struggled to find a workout she could stick to. Although she tried to stay committed to her health at a handful of trendy studios in Manhattan, she was never quite satisfied with the results.

“I would join for a couple months, lose interest and then start the next one,” Trip told FoxNews.com. “I had a personal trainer for about a year, and it was extremely costly, and my friends were telling me that there was no change.”

Trip didn’t see a difference on the scale until she discovered Orangetheory Fitness, an alternative option for gym-goers who find traditional group fitness classes unchallenging or ineffective.

At Orangetheory, members move through three different stations around the studio: treadmill running, rowing and weight training. In most classes, they can expect to spend half the time on the treadmill running intervals at different speeds and inclines. For the weight lifting portion of class, personal stations are set up with all the weights, medicine balls, steps and TRX straps needed to complete the block. An instructor demonstrates the exercises, but video played on overhead TV screens also depict the moves, showing how many reps to do per set. The dual guidance aims to take the guessing game out of what to do next when members space out or lose count while exercising.

“It’s 100 percent full-body in nature,” Benjamin Horen, an Orangetheory fitness coach, told FoxNews.com. “It’s weight and resistance training, it’s core exercise, its high cardio, it’s rowing— it’s as much as we can do in over the course of an hour to keep you moving.”

To optimize fat burning, members wear heartrate monitors during the workout. The 60-minute interval-based class is designed to help their heart rates reach the target "orange" zone for at least 12 to 20 minutes.

“When you’re doing things in an intervallic way and taking yourself up to a higher level of cardio, we call it the anaerobic threshold— where it gets to be 84 or 85 percent of your maximum heart rate. That’s what we call the orange zone,” Horen said.

Getting in the orange zone produces what exercise scientists call the "EPOC" effect, excess post-exercise oxygen consumption— known as the afterburn.

“EPOC occurs when our bodies require excess oxygen after a workout in order to return ourselves to our normal physiologic steady state,” Dr. Kevin Campbell, a cardiologist in North Carolina, told FoxNews.com. “The best way to think of EPOC is a way for your body to pay off an 'oxygen debt' after an intense workout. This is why our bodies are able to burn more calories after working out.”

Besides the extra calorie boost from EPOC, research continues to suggest the health benefits of interval training.

A study published in the April 2016 edition of the journal PLOS One found as little as one minute of intensive exercise had the same endurance, muscle function and insulin resistance benefits as a 45-minute continuous workout at the same pace.

"I like the fact that I see my name on a monitor; I like to see where I stand. When I’m in a gray zone, I know that I need to push a little harder, so there's a lot of accountability," she said.

Trip said the fitness coaches help keep her on track.

“The [Orangetheory] trainers spend time with you to make sure you’re doing it right. I can’t tell you how many classes I’ve taken at other gyms where I knew I was doing things wrong and no one came up to me to instruct me the right way to do it,” Trip said. “Even though there's 30-plus people in class, there's one-on-one time and the encouragement is just amazing.”

The company says its sweat session can burn up to 1,000 calories, and many of its members can attest to the regimen’s results. Tiana Borges, 28, joined Orangetheory to shed some of the weight she gained in college. She said the workout has helped tone her legs and arms, and that she’s on her way to getting a six-pack.

“Since starting [Orangetheory], I lost 42 pounds and I went from about a size 10 to a 0 in the past two years,” Borges told FoxNews.com.

Orangetheory studios are in 40 states across the country. Sessions range between $28 and $32 on average.