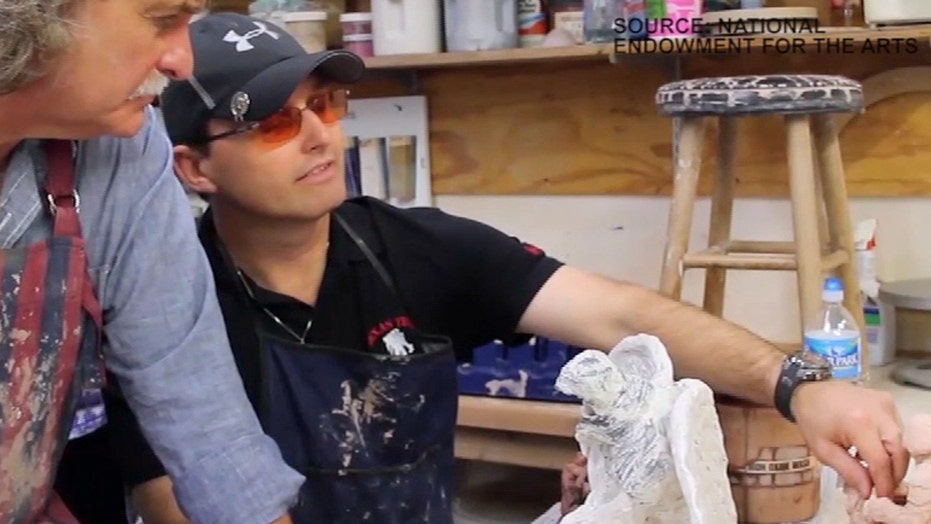 Veterans use art to battle scars of war

Veterans across the country are using creative expression to ease their symptoms of post-traumatic stress disorder (PTSD), and are getting more support from Congress.

In 2016 an additional $1.98 million in funding was added to the National Endowment for the Arts budget to support the Creative Forces NEA Military Healing Arts program. In 2017 it will expand and five art therapy sites will be added to the seven currently scattered across the country. The program is a partnership between the NEA and the Department of Defense and it puts creative arts therapy at the center of the patient-focused treatment for veterans, military members and their families.

The program has had positive feedback from veterans through surveys and evaluations by the National Intrepid Center of Excellence (NICoE) Walter Reed Bethesda. Of the military patients involved, 85 percent said the therapy has been helpful to their healing.

Wally Kollmann served in the U.S. Army during the Vietnam War. He has spent the last 45 years battling PTSD and has turned to art therapy to cope. According to the Department of Veterans Affairs, 26 percent of Vietnam veterans have suffered symptoms of PTSD or signs of impairment related to the condition throughout their lives.

“I’ve had nightmares throughout the last 45 years of being forced into a cage,” Kollmann told FoxNews.com.

His work was recently featured at a national creative arts festival in Jackson, Mississippi. The exhibit gives veterans an opportunity to express their creativity.

“I’m hoping that by doing and seeing what I’ve got here I can help release that and what I’m finding is, it’s releasing some pressure,” Kollmann said.

More than one hundred of the thousands veterans who applied were chosen to showcase their work. Elizabeth Mackey is the director of the annual event.

“It’s a great form of therapy for the veterans with PTSD and other mental health challenges,” Elizabeth Mackey, director of the annual event, told FoxNews.com.

Michael Rogan also served in Vietnam and was diagnosed with PTSD after returning home to California. He is relies on art therapy as an outlet of expression.

“I start drawing and I get right into that emotion,” Rogan told FoxNews.com. "I get in touch with myself. Because I could sit here and talk to you all day and never feel that stuff.”

Although art therapy shows promise in treating veterans with PTSD, some say more research is needed.

“I don’t know that creative arts treatments will reach the level of primary or gold standard treatments,” Dr. Charles Marmar, chair of the department of psychiatry at NYU Langone Medical Center told FoxNews.com. “I think they are minimally important adjunctive treatments.”

Marmar, who is also the director of the PTSD research program at the NYU Langone Cohen Veterans Center, said that if more conclusive research is completed on art therapy, he would recommend it as one of the main treatments for those suffering from PTSD.

As for Kollmann, he’s hoping that expressing trauma through art will help him overcome the nightmares he’s endured.

“This is creative arts, it’s a wonderful program,” Kollmann said. “It’s great therapy for all of us that are coming back from Vietnam or any war. It really has helped me in that.”