You always, always need to be careful when cooking meat. In fact, the number one source of food poisoning is rare or undercooked meat, which is why it’s one meal food poisoning experts always avoid. But some people can’t resist the allure of a juicy rare steak or burger.

According to the Academy of Nutrition and Dietetics, using a meat thermometer to ensure your rare meat is a safe temperature for consumption can make eating rare meats safe. But their standards say, while it’s OK to enjoy your steak rare, you can’t do the same with a hamburger, or any ground meat for that matter. Cooking a rare burger is definitely one of the cooking mistakes that can make your food toxic.

The reason why ground meat isn’t safe has to do with the very nature of its creation, according to food safety experts.

“Grinding the meat extends the fabrication (or cutting) process one more level,” says Ted Siegel, chef/instructor at the Institute of Culinary Education. “Usually pathogens are found on the surface of the muscle tissue, so once you start grinding up the meat, you’re dispersing the pathogens throughout more of the meat beyond the surface.” 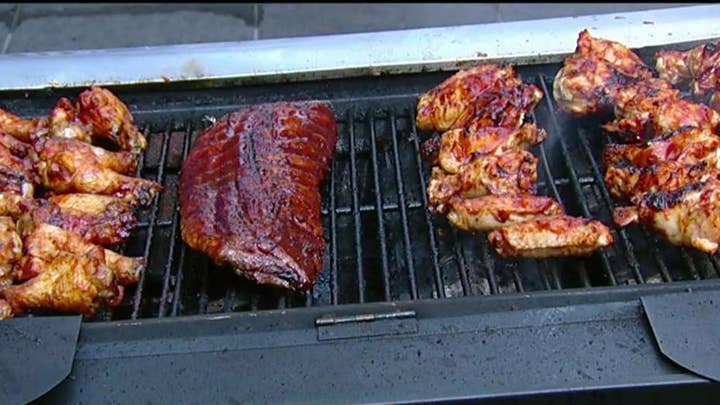 Siegel says that as a result, if you serve a burger that’s rare and undercooked, these pathogens haven’t been killed off and are still living in meat, increasing the risk of food poisoning. To eliminate this risk, the Academy of Nutrition and Dietetics says ground meat needs to reach 160 degrees Fahrenheit to be safe to eat, which would make it well done. If you’re eating it rare, there’s a chance there’s bacteria present.

On the flip side, you can still enjoy your steaks rare.

“[With] something like a steak, where the pathogens are only on the surface, once that steak is seared, the pathogens are generally killed/cooked off and you can serve it [at] a lower degree of doneness, from rare to medium,” Siegel says.

Roasts and chops can also be eaten rare, meaning the meat only needs to reach 145 degrees Fahrenheit internally to be eaten. Experts say using a meat thermometer is the safest way to ensure your food’s safety and is a good way to avoid cooking mistakes while grilling meat.