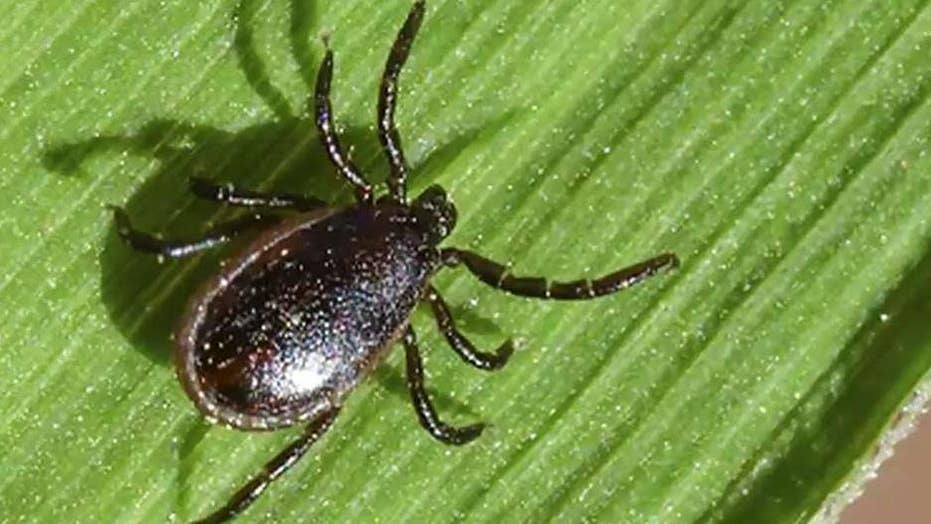 Stanford School of Medicine science writer Kris Newby weighs in on whether some disease carrying ticks are product of Cold War experiments.

A mom from Leicester, England, is warning others to be on the lookout for a common sign of Lyme disease this summer after she contracted the tick-borne illness.

Kate Allen told SWNS she took her dog for a walk in the park on a hot day. The pair trekked through an area of long grass, she said.

A few days later, Allen began to feel unwell — complaining of forgetfulness, lethargy, and a fever. She also developed multiple, red, circle-shaped rashes on her legs. The so-called “bullseye” rash then spread to other parts of her body. In total, Allen claims she developed 15 different rashes, some of which were 12 inches across.

A so-called "bullseye" rash is a common sign of Lyme disease. (SWNS)

Initially, Allen said she went to the pharmacy but was encouraged by a pharmacist to see a doctor, who later confirmed the mom of three had a “mild form” of Lyme disease. The 28-year-old told SWNS she was likely bitten by an infected tick while walking her dog through the grass.

"I almost didn’t go [to] doctors as it wasn’t painful but if you look up just how serious this can be, I'm so glad I did,” she told the news outlet. "All I did was go on a family dog walk in a field.”

"The symptoms began when I started to feel very tired. I had a temperature and became more forgetful than usual,” she added.

Allen was treated for Lyme disease with a 21-day course of antibiotics. In most cases, those who are given antibiotics within the first few weeks of exposure recover, though “symptoms such as fatigue (being tired) and muscle aches can last for more than 6 months” in some cases, per the Centers for Disease Control and Prevention (CDC), which noted that condition is called “Post-treatment Lyme Disease Syndrome.”

"All I did was go on a family dog walk in a field," Allen said. (SWNS)

“Lyme disease is caused by the bacterium Borrelia burgdorferi and is transmitted to humans through the bite of infected black-legged ticks. Typical symptoms include fever, headache, fatigue, and a characteristic skin rash called erythema migrans,” the CDC says.

If left untreated, the disease can result in nerve damage, inflammation around the heart and memory loss, among other health ailments, according to Health.

“I would have never known about this until I went to the pharmacist. I'm still waiting for my next appointment for a check-up,” Allen told SWNS.