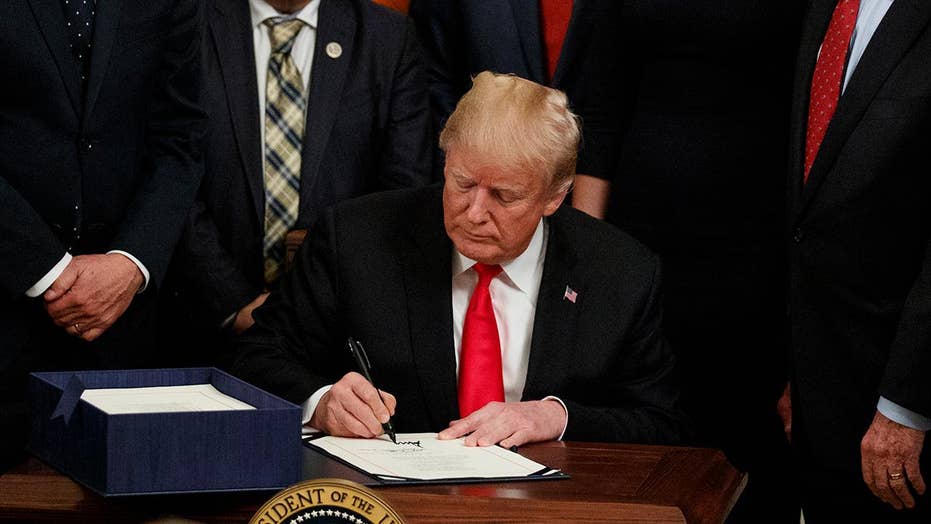 The president signs a new opioid bill into law.

President Trump signed a sweeping bipartisan bill into law on Wednesday aimed at making medical treatment for opioid addiction more widely available while also cracking down on illicit drugs being sent through the mail.

The bill, which was passed by Congress earlier this month, will expand access to substance abuse treatment in Medicaid. The Senate voted 98-1 on the measure following the House’s 393-8 approval.

More than 70,000 Americans died of drug overdoses last year, marking a 10 percent increase from 2016. Of those deaths, 48,000 involved opioids. While Secretary of Health and Human Services Alex Azar said on Tuesday that the numbers were leveling off, he cautioned that the nation remains “so far from the end of the epidemic, but we are perhaps, at the beginning of the end.”

JAMIE LEE CURTIS REVEALS SHE WAS ADDICTED TO OPIATES: 'NO ONE KNEW'

Azar suggested multipronged efforts, including an increase in medication-assisted treatment and broader access to naloxone are paying off, noting that toward the end of last year and through the beginning of this year, the number of deaths “has begun to plateau.”

Before Trump signed the bill, he also addressed the several suspicious packages and devices that had been sent to several current and former high-ranking government officials earlier on Wednesday. While vowing that the safety of Americans is his "highest and absolute priority," he pledged a thorough investigation and said the administration would “spare no resources or expense in this effort.”