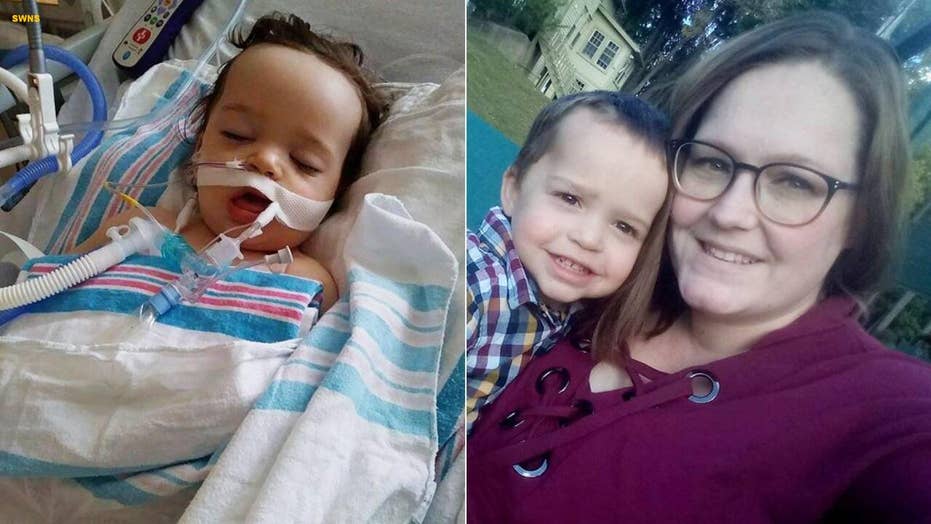 1-year-old Cotter nearly died after he ate a laundry pod. An endoscopy revealed that the detergent had burned parts of his esophagus and the top of his stomach lining.

A Rhode Island toddler who still suffers from breathing issues nearly two years after he accidentally swallowed a laundry pod is lucky to be alive, his mother said, after he spent three days on life support on the hospital.

“I knew it was bad but I didn’t realize the severity of it,” Katelyn Cunha Flores, Cotter Cunha’s mother, told SWNS. “He was beginning to have difficulties breathing and his condition was deteriorating very quickly. They brought him into emergency surgery and managed to intubate him, using a very narrow tube normally used for smaller babies.”

Flores said she was doing the laundry in July 2017 ahead of the family’s trip to New Hampshire to celebrate the 4th of July while then-1-year-old Cotter played at her feet. She said when she turned her back to pack for a moment, she heard her son cry out.

“I turned around to see what was wrong and I saw his hands were covered in something,” the 30-year-old told the news outlet. “That’s when I noticed the plastic of the pod hanging out of his mouth.”

"It was the most awful night of my life."

Laundry detergent packets can be tossed straight into the washing machine without having to measure the right amount of liquid, but pose a risk to young children, according to Nationwide Children’s Hospital. The hospital describes the packets as “the perfect size and shape to be picked up” by toddlers, who may then pop it into their mouths.

Flores said the convenience of the packets does not outweigh the damage they can do.

“The colorful packets can also look like candy or juice to a young child,” according to the hospital. “Any kind of detergent can be harmful, but the chemicals in laundry detergent packets are especially concentrated. Children who swallow those chemicals have had trouble breathing, have lapsed into comas, and have had other serious health problems. There have even been a few deaths. Even just touching the chemicals can cause burns and other injuries.”

Health agencies and physicians groups have long warned about the dangers of these products, especially the risk they pose to young children. A 2016 study published by the American Academy of Pediatrics (AAP) recorded 62,254 calls to U.S. poison control centers between 2013 and 2014 for unintentional exposure to laundry or dishwasher detergent involving children under 6. Children under 3 accounted for the majority of calls.

Flores said she immediately put Cotter in the car and headed to Hasbro Children’s Hospital in Providence, where he was admitted to the pediatric intensive care unit. She said an endoscopy revealed that the detergent had burned parts of his esophagus and the top of his stomach lining. She told SWNS that Cotter coded the first night in the hospital and that she “didn’t think he would make it through.”

“It was the most awful night of my life,” she told SWNS.

After three days on life support, Cotter began showing signs of improvement and he was extubated, but doctors are unsure about the long-term impact of his injuries. Flores said that while he was hospitalized, doctors discovered he had a birth defect that caused his airway to be a different shape.

“When he gets sick now, or coughs, it is a really harsh cough,” she told SWNS. “It sounds like he has croup. He has a nebulizer too.”

Flores is warning other parents about the potentially fatal consequences of using the pods, and insists “there is absolutely no need to use them.”

“We got very lucky,” she told SWNS.