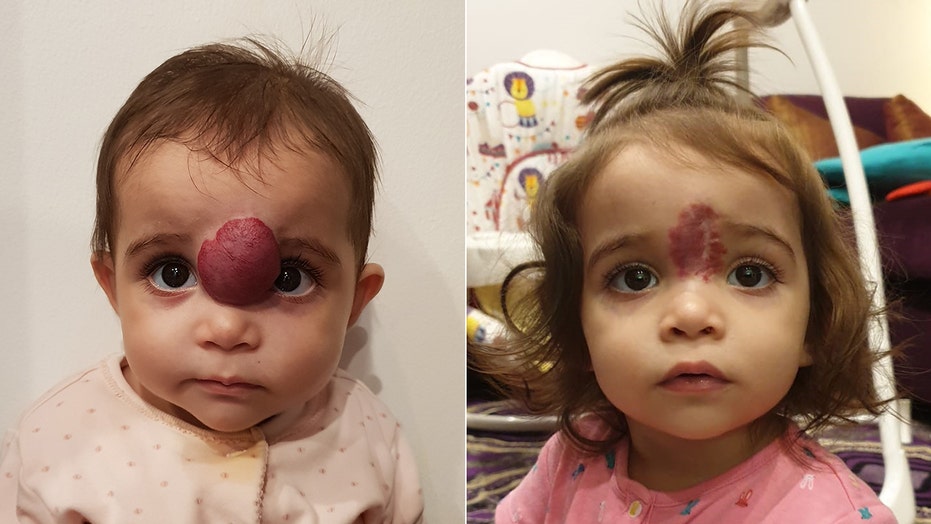 A 1-year-old in Kuwait who was subject to stares and rude comments because of a large growth in between her eyes has had her life dramatically transformed thanks to a surgeon in her father’s native U.S. Noor Nunez, whose father Joe is a contractor for the U.S. Army who retired from the military in 2006 but remained in Kuwait, first started developing what her family described as a “small skin irritation” just a few weeks after birth.

Noor, pictured before her surgery, began developing what looked like a skin irritation just a few weeks after her birth. (Courtesy of Nunez family.)

The Nunez family turned to several medical professionals and discovered their daughter had a hemangioma but were unsure of what that meant in terms of a resolution. Hemangiomas are biological, benign tumors that grow during a child’s first year of life but can be stopped from growing with early intervention. Once the hemangioma stops growing, it never grows again.

Over time the growth expanded the cover the space between her eyes and was impeding her vision. (Courtesy of Nunez family.)

But in Kuwait, Nunez said a sound medical opinion was difficult to find, with one specialist allegedly prescribing a topical ointment and suggesting they monitor the growth —  which had reached 2.5-centimeters in width —  for several years, at which point it “should go away.”

At that point, Nunez and his wife turned to the internet to begin reaching out to specialists in other countries before discovering BirthMarkCare.com, a website set up by Dr. Gregory Levitin, an otolaryngologist and vascular birthmark specialist at New York Eye and Ear Infirmary of Mount Sinai in New York. He sent an email describing his daughter’s situation, and by morning Levitin had responded.

Levitin requested photos of Noor’s hemangioma and knew he could provide the solution the family was desperately searching for.

“He essentially said, ‘Whatever you have to do, please let’s work toward scheduling and getting your daughter into surgery here with me because at the current condition, there’s no other resolution but surgery,’” Nunez told Fox News.

Noor’s consultation and surgery in New York were scheduled for July, and Levitin got to work planning for his patient’s life-changing trip.

“There is no textbook for how to treat a hemangioma, no two are ever quite the same,” he said. “Every patient needs an individualized treatment plan.”

Levitin said he knew he wouldn’t be able to remove 100 percent of Noor’s hemangioma but would be able to contour the skin back to the normal shape and size so that she would no longer have a protuberance between her eyes. The surgery took 2 hours and 20 minutes, and while he had to leave some of the red skin behind, Levitin is confident that laser treatment will return the skin back to its natural color.

“Previously when you looked at Noor, here in Kuwait everyone would just draw towards [the growth],” Nunez said. “Now when you see her she looks like she has a little red, but it’s a completely flat skin surface.”

She will head back to New York in the coming years for a laser treatment that will turn the red skin back to its natural color. (Courtesy of Nunez family)

What's more, Levitin said there is no chance of recurrence because the hemangioma had stopped growing.

“The surgery was a huge success,” he said, adding that Noor’s case is an important reminder for patients with vascular birthmarks speak out and seek an early evaluation and accurate diagnosis.

Levitin said his website has reached patients in over 50 countries, with some traveling to New York to see him, while others simply send pictures for medical advice. Nunez said the family was also moved to share their story and experience with Levitin in the hopes of helping others find relief.