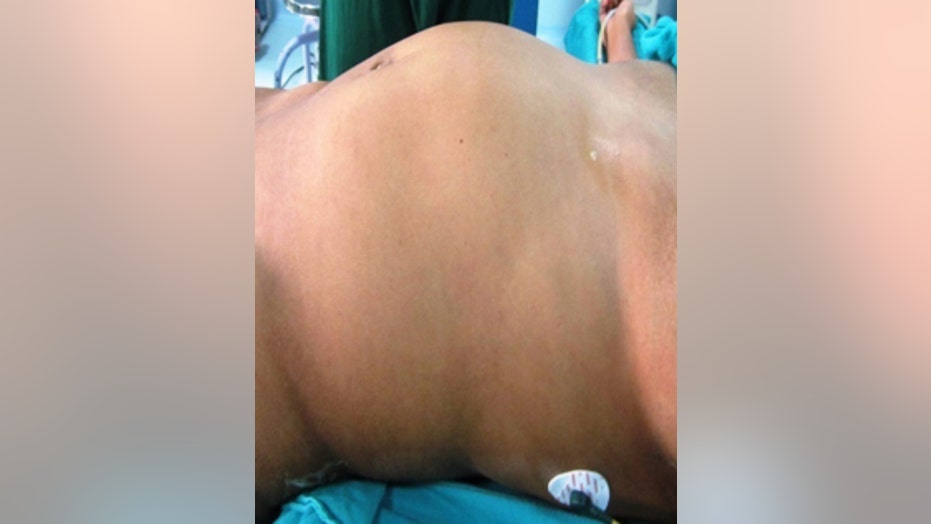 A 17-year-old with a history of abdominal pain and a growing lump landed in a medical journal after doctors discovered that the mass was actually her malformed twin, marking what they believe is the first case of its kind to occur in a female her age.

The patient, pictured before surgery, said the lump had been causing pain and growing in size. (BMJ Case Reports 2019)

In a published BMJ Case Reports, the unidentified woman, who was treated by doctors in India, presented with a firm, irregularly shaped lump that took up her entire abdomen. A scan revealed the mass had fat density areas, soft tissue, and “multiple calcified density components of various sizes and shapes resembling the shape of vertebrae, ribs and long bones.”

Surgeons removed the mass, which they found had hair, bones and other body parts, and determined it to be a case of fetus in fetu (FIF), which occurs in only about 1 in 500,000 live births, and has been reported less than 200 times. The condition is diagnosed when a malformed fetus is found in the body of a living twin. The report’s authors noted that the condition more typically is found in younger males, making her case exceedingly unusual.

“This is the eighth case of adult FIF and the first case of FIF in [an] adult woman worldwide,” the report’s authors wrote.

OHIO GIRL DIAGNOSED WITH RARE MOSQUITO-BORNE ILLNESS THAT CAN CAUSE BRAIN INFLAMMATION, SEIZURES

Two years after the removal, the patient is reported to be doing well.

“I was much worried about my abdominal lump, after [the] operation I am feeling very well and my abdomen is now flat and my parents are also very happy,” the unidentified patient said in the case report. “Thanks to all operating doctors.”