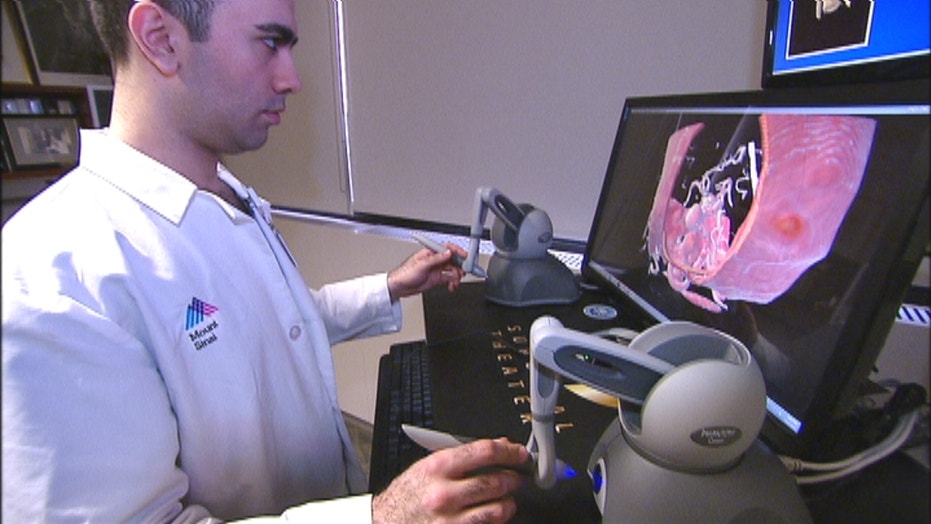 Before fighter pilots go into battle, they always do one thing first: practice.

Fortunately, flight simulators have long allowed pilots to train and rehearse their complex missions in advance, so as to limit the amount of surprises they might encounter along the way.

In an attempt to replicate this concept, a Cleveland neurosurgeon and two ex-Israeli Air Force R&D officers have teamed together to apply flight simulation technology to a more benevolent purpose – aiding the sick.  Through their efforts, they have developed an FDA-approved surgery rehearsal program called Surgical Theater, which allows physicians to prepare and practice complicated brain surgery before they even enter the operating room.

Moty Avisar, president and co-founder of Surgical Theater, said the main motivation behind creating this technology was a desire to help others rather than hurt.

“Me and [co-founder Alon Geri], we used to develop flight simulation for the Israeli Air Force, and we felt we needed to transfer our knowledge from building missile simulations and F-16 simulations to doing good for others and to cure,” Avisar, who spent 20 years overseeing large scale R&D flight simulator projects, told FoxNews.com.  “We used to develop missiles to hit buildings, but now we’ve developed something for surgeons to use to do good.”

Taking three years to develop, Surgical Theater works by utilizing magnetic resonance imaging (MRI) and CT scans to create 3D models of patients’ brains that can be explored on a computer screen.  Then, using two joysticks that act as surgical tools, practicing surgeons can go through the motions of the operations they will be performing within the coming days.

The system is designed to respond realistically to the surgeon’s instruments and inputs, so if he or she pushes on a blood vessel, it will move in a highly realistic way on screen.  Additionally, users can input virtual clips or medical devices to see how they interact with tissues in the brain.  And just like flight simulators, Surgical Theater can permit the remote connection of multiple platforms, so participants all over the world can work together and collaborate on the same procedure simultaneously.

With its wide range of capabilities, Surgical Theater can be used to practice a number of complicated brain procedures – such as removing a cancerous tumors and clipping a potentially deadly aneurysm.

“When you’re virtually operating on a tumor, it really looks the same,” Avisar said.  “The reflection of the light from the aneurysm convinces you it’s the aneurysm you’re operating on.  It’s all about understanding realism, and it took us a while to see how realism translates to surgery – such as the movement of the tissue and the reflection of the light on the tissue.”

So far, Surgical Theater has been used to prep surgeons for more than 300 surgeries across the United States.  Dr. Warren Selman, who serves as the medical director for Surgical Theater, has used the program to practice dozens of operations, claiming that the device’s tools help him to establish very precise muscle memory.

He also noted certain cases in which the program has helped him predict complications that may have gone unnoticed in a typical CT scan.

“With one case we did, although it went well, we didn’t anticipate having a sister aneurysm. We couldn’t see that on normal radiology, but in Surgical Theater, it kept showing up as something was there,” Selman, medical director and neurosurgeon-in-chief at University Hospitals Case Medical Center in Cleveland, Ohio, told FoxNews.com.  “If I didn’t know something was there, I would have put in a clip, and it would have most likely ruptured.  But since we knew it was there, we used a bayonetted clip, which is a little longer.  So it’s the ability to avoid a problem like that, which is just a whole other level of comfort.”

Given the success of their technology, Avisar and Geri hope to one day provide every surgeon in the United States with his or her own surgery rehearsal program.  And in an attempt to push their system even further, they are in the process of developing a Surgical Theater program that can also be utilized inside the operation room.  That way, if a surgeon encounters an unforeseen complication during surgery, he or she can practice overcoming it and then immediately return to the procedure.

Overall, Avisar said that feedback regarding the system has been overwhelmingly positive, as it helps surgeons to feel much more comfortable when performing such complicated procedures.

“The one thing I learned working with surgeons is you don’t need to convince them to get the better outcome or [pursue] the better option,” Avisar said. “So far, I haven’t met any surgeons who have had any hesitation when showing them the benefits of the system. It’s a done deal.”