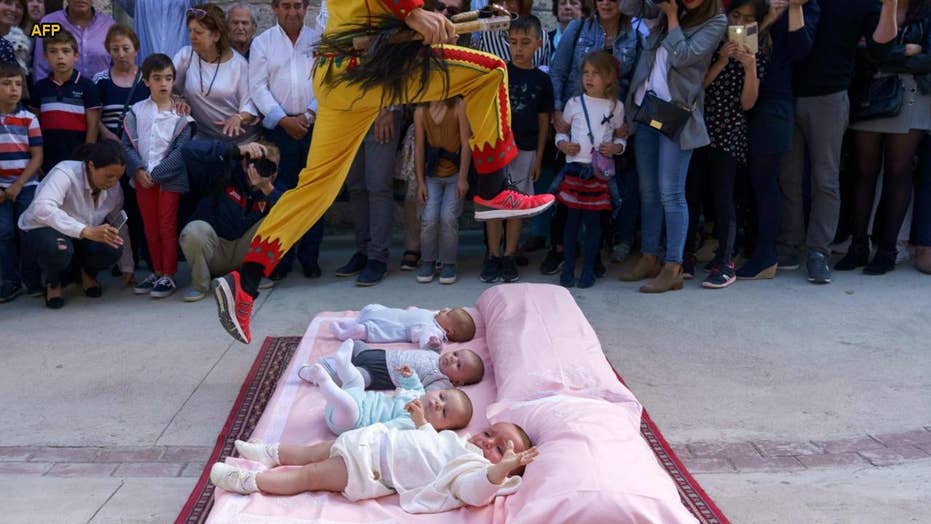 Every year in Burgos, Spain, locals and tourists celebrate a truly unique festival that’s been going on since the early 1600s. Called El Colacho, this religious event culminates in a finale of baby jumping during the Salto Del Colacho—literally jump of the devil.

According to event website Rad Season, the event is essentially a christening of babies born in the town that year. It ends with the local Catholic priest blessing the children after the devil jumps over them.

Youtuber Fearless & Far captured the event in 2017, showing the day’s unusual activities and the crowd’s pleasure in celebrating. During the video, the Salto Del Colacho involved a man dressed to look like the devil in a bright red-and-yellow suit and face mask.

At first, the man carried a whip that he used on the spectators, often kids, as he ran through the town. The townspeople called out insults as he ran, taunting the devil.

After this first phase of the event, townspeople then set up mattresses in the streets where they would lay their babies. The babies were dressed in soft colors like white or pink, and some townspeople hung white blankets from windows.

COUPLE FORCED TO GIVE UP NEWBORN TWINS AFTER WRONG EMBRYOS IMPLANTED IN IVF MIX-UP, LAWSUIT CLAIMS

El Colacho, defeated from his rampage through the streets, would jump over the babies in a similar course to his run through the town. According to Fearless & Far, this part represents the babies’ “cleanse from sin and disease.”

Children scattered rose petals on the babies as they were blessed by the local priest, commencing the unusual festivities.