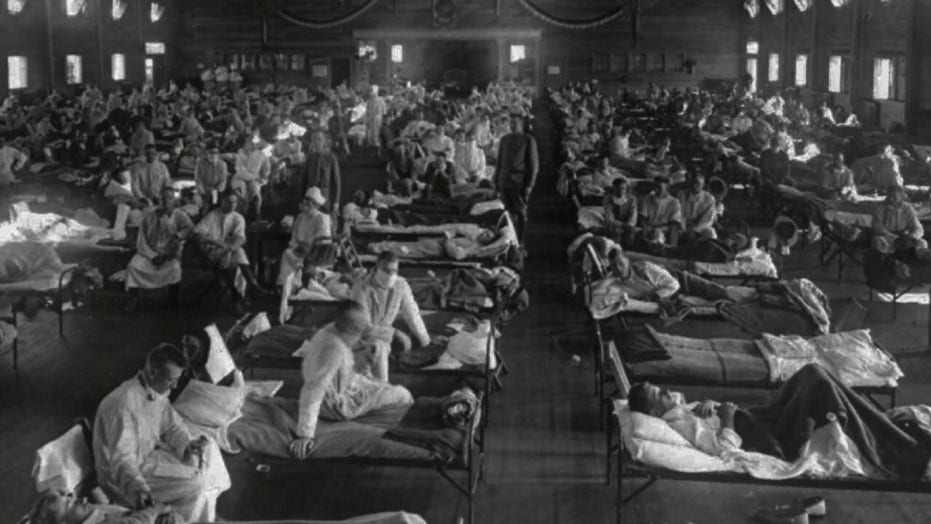 Lessons from the Spanish Flu: 50 to 100 million died worldwide during outbreak

The flu pandemic swept the globe in 1918 and changed the course of history; State Department correspondent Rich Edson reports.

A pair of sisters have died from two separate global pandemics, over a century apart, according to a report on Friday.

Selma Esther Ryan died Tuesday from the coronavirus at an assisted living facility in Austin, Texas, three days after celebrating her 96th birthday. Her death comes after her older sister, Esther – whom she never met – died at the age of 5 during the 1918 Spanish flu pandemic.

“On April 3, I got a call from the facility that five residents, including my mother, were running a temperature,” Ryan's daughter, Vicki, told Austin's KXAN-TV.

“Over the next five days, I watched through the window as she got sicker and sicker. It was so hard to not be with her. Her 96th birthday was April 11. Our family gathered outside her window, but it was obvious that something terrible had happened.”

AMERICA RELEARNING THE LESSONS OF THE 1918 SPANISH FLU PANDEMIC

The Spanish flu is estimated to have infected 500 million people or one-third of the world’s population, according to the Centers for Disease Control and Prevention. At least 50 million people died worldwide from the virus with roughly 675,000 fatalities occurring in the United States.

The coronavirus, described as the worst pandemic since the Spanish flu, has infected more than 2.4 million people and killed at least 165,200 around the globe.

The U.S. has seen more than one-fourth of all COVID-19 infections, with at least 40,600 deaths from the virus, according to data from Johns Hopkins.

While the elderly or those with preexisting health conditions are at a higher risk for severe illnesses from COVID-19, the mortality rate from the Spanish Flu was uniquely high in people aged 20 to 40 as well as those younger than 5 years old, the agency said.