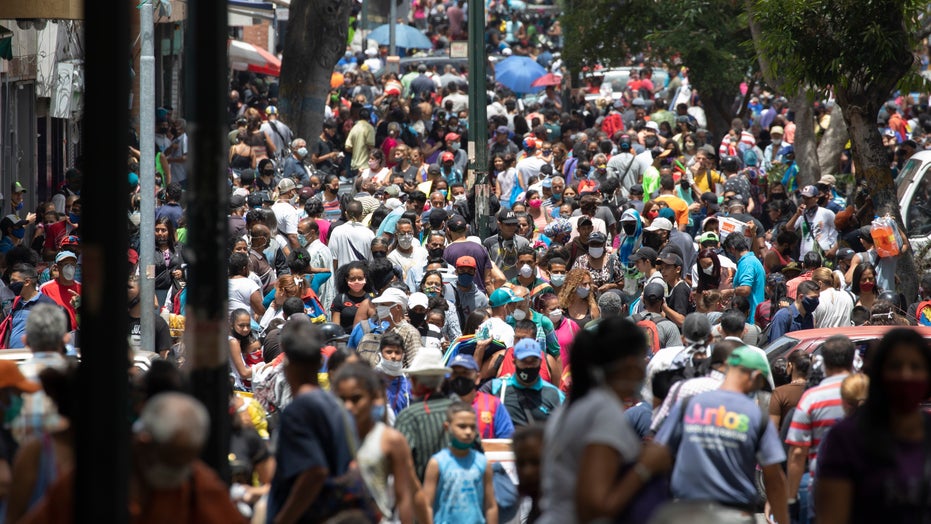 The World Health Organization on Sunday reported a record daily increase in worldwide coronavirus cases, with more than 183,000 new infections in a period of just 24 hours.

Most of the new cases were reported in Brazil, which saw its infections jump by 54,771. The U.S., was close behind with 36,617 new cases amid a recent surge, while India recorded more than 15,400 daily infections.

"Almost 6 months into our response to COVID-19, we continue to learn many things about this new disease," said WHO Regional Director Dr. Ahmed Al-Mandhari. "WHO is working with our partners to establish the best scientific evidence base on which to advise governments, health professionals and the public on the most effective ways to prevent, diagnose, treat, and recover from COVID-19."

CORONAVIRUS WEAKENING MAY DISAPPEAR ON ITS OWN, ITALIAN DOCTOR SAYS

People, some wearing face masks as a measure to curb the spread of the new coronavirus, walk in the Catia neighborhood of Caracas, Venezuela, Saturday, June 20, 2020, during a relaxation of restrictive measures amid the new coronavirus pandemic. (AP Photo/Ariana Cubillos)

Overall during the pandemic, the organization has reported 8,708,008 total worldwide cases, as well as 461,715 deaths from the virus, with 4,743 more fatalities recorded on Sunday.

Out of the new daily increase, the Americas have seen 116 041 new cases and roughly two-thirds of daily deaths recorded in the 24 hours period, according to the WHO. Experts believe the new record number of cases was due to a broader and increased community-based transmission as well as widespread testing.

In the U.S., President Trump said Saturday the country has tested 25 million Americans, but the “bad part” meant that more cases were found.

DR. SIEGEL ON TRUMP RALLY BACKLASH: NO DIFFERENT THAN PROTESTS 'FROM A PURELY PUBLIC HEALTH POINT OF VIEW'

The virus appears to be spreading across the West and South regions of the U.S. Arizona reported over 3,100 new infections, just short of Friday’s record, and 26 deaths. Nevada also reported a new high of 445 cases.

Meanwhile, Florida and South Carolina both saw a record increase in cases throughout multiple days within the past week.

Brazil, which has the world’s second-largest number of cases behind the United States, officially passed 50,000 coronavirus deaths on Sunday. The country is already dealing with more than 1 million cases, rising political instability, and a crippled economy, according to Reuters. President Jair Bolsonaro has been downplaying the risks as the country reached the coronavirus fatality milestone.

"A large increase observed on this day was in part due to a lag in reporting from three states (Bahia, Rio de Janeiro, and Sao Paulo), compounding data from two days," the WHO said.

South Africa reported a single-day high of nearly 5,000 new cases on Saturday, along with 46 new fatalities.

In Asia, China and South Korea reported new coronavirus cases Sunday in outbreaks that threatened to set back their recoveries.

Chinese authorities recorded 25 new confirmed cases -- 22 in Beijing. In the past week, Beijing tightened travel controls by requiring anyone who wants to leave the Chinese capital, a city of 20 million people, to show proof they tested negative for the virus.