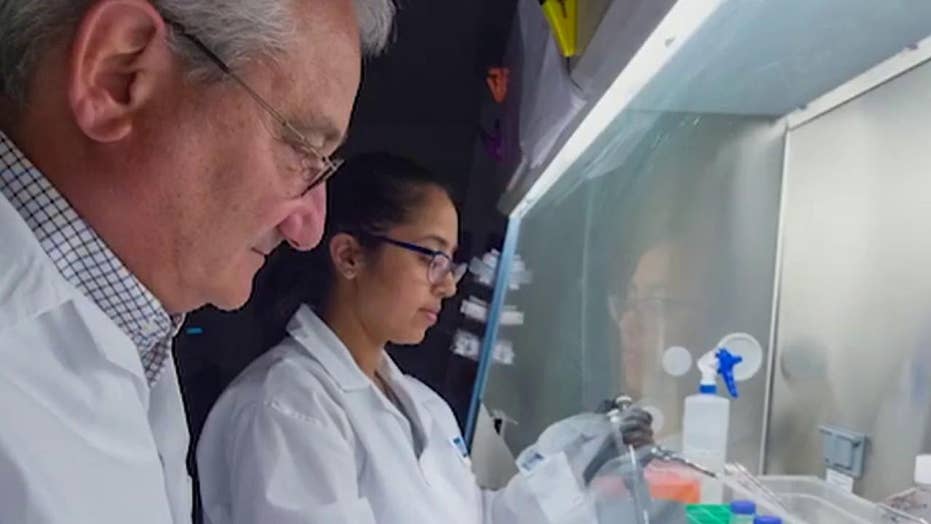 Progress is being made toward a viable vaccine for the coronavirus, say researchers at a Philadelphia-based pharmaceutical company.

Inovio Pharmaceuticals along with the University of Pennsylvania’s research facility and the Wistar Institute, have been working on the vaccine as early as this past January. Originally reported by Fox News, the vaccine was fast-tracked into development after the Chinese government made the genome sequencing of COVID-19 public.

Nearly three months later, a crucial first phase of testing has begun. Researchers with Inovio say that they were able to design their vaccine in just three hours after receiving a sequence for the virus.

"We immediately started testing the vaccine in the laboratory. And we're quite confident about the results that we've seen," Dr. Kate Broderick, senior vice president, R&D at Inovio Pharmaceuticals, tells Fox News, adding that trials on human subjects began just last week. "We treated three people last week. But getting our vaccine into human beings is a huge step. But we did that in 83 days, which certainly in my career is absolutely an unprecedented level of speed."

While testing has begun, Broderick says there are still too many unknown variables associated with the virus and how it may affect the vaccine.

"In some patients, it looks like people who had the disease but now recovered have kind of these sort of low antibodies levels, but we don't know if that's a consistent result across everybody that's contracted the virus so far," she says. "So, we need to learn more about how the virus affects people and how people are affected by that infection before we can see too much about how that impacts vaccine design."

"What we don't know is that they contract the virus for a second time, which obviously would be very unlucky, but possible. Or is it just that they haven't fully recovered the first time around? So that's really what we're learning as we speak and as we move forward. And that's what kind of makes treating this virus very difficult because there's still so much we don't understand about it."

Approximately 40 people will be tested during the initial phase at locations in Kansas City and the University of Pennsylvania. Final results from the tests are expected by the summer.

"Phase one is supposed to be normal, healthy people. And in this case, they have not, as far as we know, they have not been infected with COVID-19," Dr. David Weiner, of the Wistar Institute, and one of the lead researchers working on the coronavirus vaccine, told Fox News. "The first study is really just safety and tolerability in relatively low-risk people just to make sure the vaccine by itself, how well it's tolerated by people. You're watching that very closely, so you can figure how many people you can give it to and whether there's going to be issues."

CORONAVIRUS VACCINE TO BE DEVELOPED FROM DIGITAL DNA SEQUENCING

This part of the study would be followed by phase two, in which the at-risk population is tested.

"Phase two is really where you start to test out larger numbers and efficacy. And Inovio has already produced enough dosing for that several thousand doses in there because that process is so robust to get through that study as well. So, that's clearly on their radar."

Inovio recently received a $9 million grant from the Coalition for Epidemic Preparedness Innovations for the express purpose of speeding up the process of getting a vaccine to market. The process is tedious as researchers often have to start from scratch when there’s a new outbreak. But the pharmaceutical company, along with Dr. Weiner's team, has been using proprietary tech from past vaccination developments in which they used digital mapping of DNA sequences. Back in 2016, Inovio was able to get a Zika virus vaccine to clinical trials within seven months.

However, getting a corona vaccine to market may take longer.

"When it goes to expanded efficacy studies, which are called phase three, normally take a very, very long time," Dr. Weiner says. "That's why with vaccine development, all the proceeds normally take years to decades."

"So to get to a licensed vaccine, a vaccine that would be available like that, we're talking about a year and a half to two years. Well, that would be all the way through."

The doctor points out however, that doesn't necessarily mean that we won't see the vaccine being used much sooner. Dr. Wiener references the response to the Ebola outbreak.

"Ebola in West Africa was basically tested through phase one," He says. "They did a very, very exceptionally clever trial design and were able to get to effiacy in a relatively small number of people in very quick time to get through their phase two. And it surprised everybody, quite honestly, in a positive way, how fast they're able to do that. It took certainly less than a year."

Weiner says he believes that high-risk areas of the outbreak could see the vaccine much sooner and if needed, an emergency use authorization could be enacted.

"An emergency use authorization is not usually used, and that is where you get through early studies and show it's safe and you're given permission to start distributing it more widely," he says. " And there has been a lot of discussion from that from a group in Oxford, which is going to start their vaccine trial sometime in the summer. That has the positive in the sense that if the vaccine is safe, you're sort of using it already on lots of people."

"And that’s really completely up to the authorities to decide those kinds of things. And I'm sure they'd be a lot of discussions. So that's something you're likely to hear about a lot. The idea of emergency authorization.”