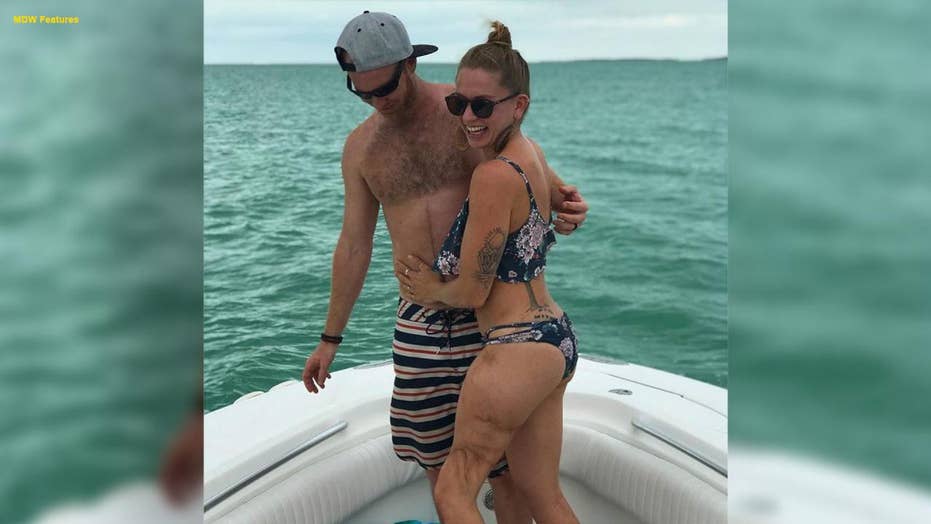 31-year-old Danielle Crease from Miami faced possibly losing her leg, or living with a partially paralyzed limb for the rest of her life after a tragic boating accident, but thanks to a revolutionary medical procedure she has since regained movement and strength in her leg.

Nearly six years after a boating accident left 31-year-old Danielle Crease with severe injuries including a partially paralyzed leg, the personal trainer is regaining movement and strength in her limb thanks to a revolutionary medical procedure. Crease, of Miami, said she had climbed off a boat she and her friends were on during a weekend trip in September 2013 to join her husband in the water when she was hit by a second boat.

“I remember being tossed around in the water, almost like being in a washing machine,” Crease, who wound up with a torn Achillies, gaping wounds and a severed sciatic nerve, told MDW Features. “The next thing I knew I came out of the water and someone asked if I was OK. I looked down at the water into an ocean of blood.”

Crease, who was set to head to Taiwan to become a teacher, said the next thing she remembers is waking up intubated at the hospital unable to move her leg. About a month after the accident, Crease’s doctors approached her with an option for a revolutionary type of nerve graft involving her sciatic tissue, which they had harvested on the day of her accident, in the hopes that it would help her eventually regain movement in her leg.

A typical nerve graft procedure involves replacing a gap in the injured nerve with a graft taken from a different nerve, according to Columbia’s Neurological Surgery department. Once the graft is placed, it serves as a channel where regenerating sensory or motor nerve fibers can grow, which occurs at a pace of about an inch per month.

In Crease’s case, surgeons allowed her nerve to grow and recover independently. In a second procedure, the nerve was repaired and replaced with nerves taken from her legs, MDW Features reported.

Crease said while she’s never regained sensation in her limb, she did begin experiencing the surgery’s success why laying by the pool one day in 2015.

“It took two years before anything happened,” she told MDW Features. “The doctors were always encouraging me to try to move my foot and toes. They explained that I needed to train my mind to not forget how to perform these movements, even if it led to nothing. I was laying by the pool in Miami one day and I gave it a try. To my absolute shock and disbelief, it moved slightly. I worked on it all the time after that.”

Since that day, Crease has continued working in the gym to gain strength in her leg. She told the news outlet that she knew “it was never going to be a complete recovery,” but that she has since regained “about 70 percent of my quad strength and only 30 percent of my hamstring strength.”

Crease has credited the support of her friends and family with helping her recover from the trauma of the accident, which included overcoming depression.

“Recovery included battling depression, with waking up being the worst part of the day,” she told MDW Features. “It wasn’t a bad dream, it was real and I couldn’t escape it. There was a lot of fear for those first few months. I was in a boot and restricted to a wheelchair, so I didn’t leave the house much.”

She said the promise of surgery helped keep her hope alive, and that she now has learned to embrace the “tools to overcome” tragedy because “those tools are all within.”

“The accident was both the best and worst thing to ever happen to me,” she told MDW Features. “To be honest, I’m not always mad at the accident anymore. I have met some amazing people because of what happened.”