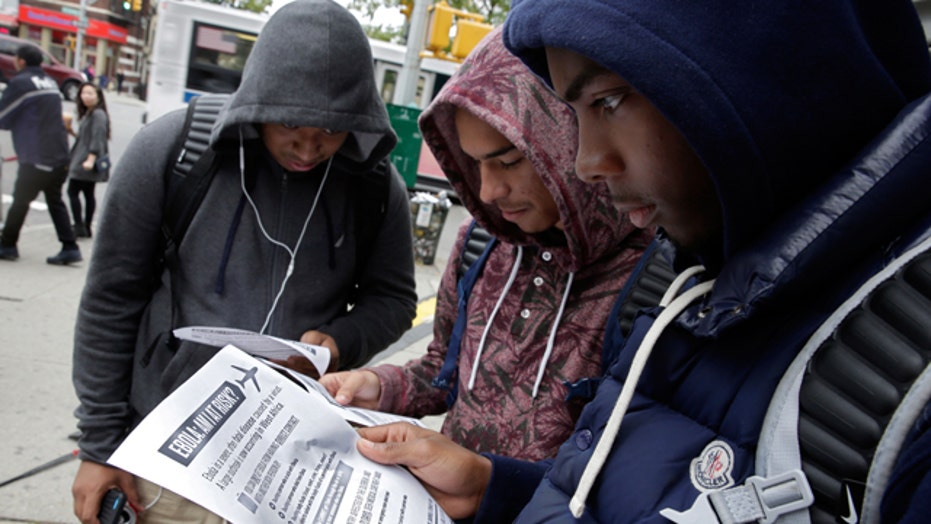 Both New Jersey Gov. Chris Christie and New York Gov. Andrew Cuomo said Friday they are ordering a mandatory, 21-day quarantine for all doctors and travelers who have had contact with Ebola victims in the ravaged countries of West Africa.

The move comes a day after a Doctors Without Borders volunteer was diagnosed with the disease after returning to the U.S. a week after treating Ebola victims in Guinea.

New Jersey Gov. Chris Christie and New York Gov. Andrew Cuomo said the case forced them to conclude that the two states need guidelines more rigorous than those of the U.S. Centers for Disease Control and Prevention, which recommends voluntary quarantines.

"It's too serious a situation to leave it to the honor system of compliance," Cuomo said.

A woman who arrived at Newark Liberty International Airport from West Africa developed a fever and was the first traveler to be quarantined under an Ebola watch Friday.

She had no symptoms upon arrival, authorities said.

Dr. Craig Spencer was traveling in New York City prior to his diagnosis Thursday. Health officials said he followed U.S. and international protocols in checking his temperature every day and watching for symptoms, and put no one at risk. But others said he should have been quarantined — that is, kept away from others, either voluntarily or by the government — during Ebola's 21-day incubation period.

An automatic three-week quarantine makes sense for anyone "with a clear exposure" to Ebola, said Dr. Richard Wenzel, a Virginia Commonwealth University scientist who formerly led the International Society for Infectious Diseases.

Doctors Without Borders said in a statement that a quarantine of that nature would be going to far and that people who contract Ebola are not contagious until symptoms begin.

"As long as a returned staff member does not experience any symptoms, normal life can proceed," the organization said in a statement.