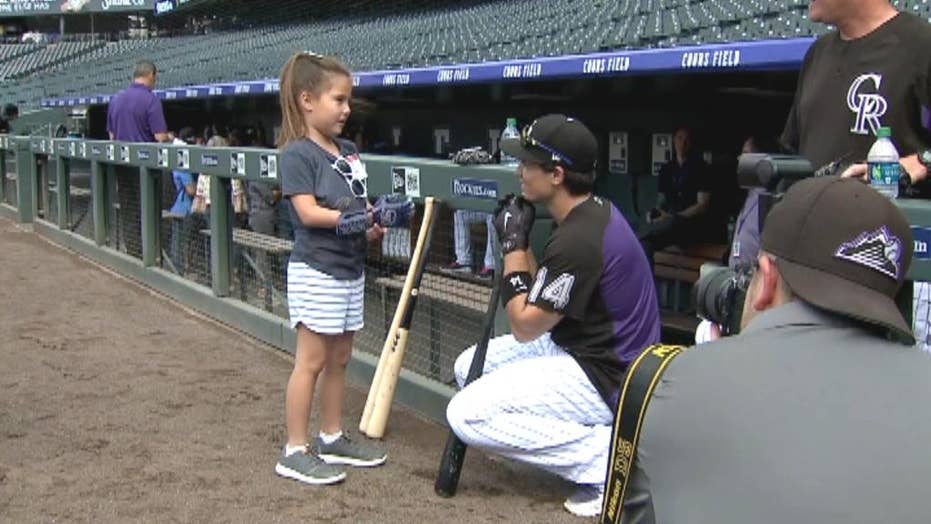 Dawson threw an underhand pitch to Rockies pitcher Chad Bettis, who later posed for a photo with the young girl.

"Thank you @cbettis35 for catching Haile's pitch and for being part of her #journeyto30," Dawson's mom, Yong, posted on her daughter's official Instagram account haileys_hand. "You are an inspiration."

The 8-year-old, who threw the first pitch during Game 4 of the 2017 World Series in Houston, isn't afraid to step into the limelight. So far, she's delivered pitches at Baltimore, Washington, San Diego, San Francisco, Chicago Cubs, Texas and Cleveland.

The young girl was born with Poland syndrome — a rare birth defect that causes an "underdeveloped or absent chest muscle on one side of the body, absence of the breastbone portion of the chest muscle and webbing of the fingers of the hand on the same side," the U.S. Department of Health and Human Services states on its website.

“She was born with a little pinkie, a little thumb and no middle fingers,” Dawson's mom, Yong, explained to the news station.

In 2014, Dawson was fitted for a robotic hand created by the University of Nevada Las Vegas. The 3-D printed prosthetic allows Dawson to use her hand freely as she moves her wrist.

“It helps me grab stuff because I can’t grab anything with my hand,” Dawson said.

Along her MLB journey, Dawson said she hopes to raise awareness for her rare condition — and inspire others to follow their dreams.

She is scheduled to wrap up her MLB stadium tour across the U.S. in Los Angeles on September 16.