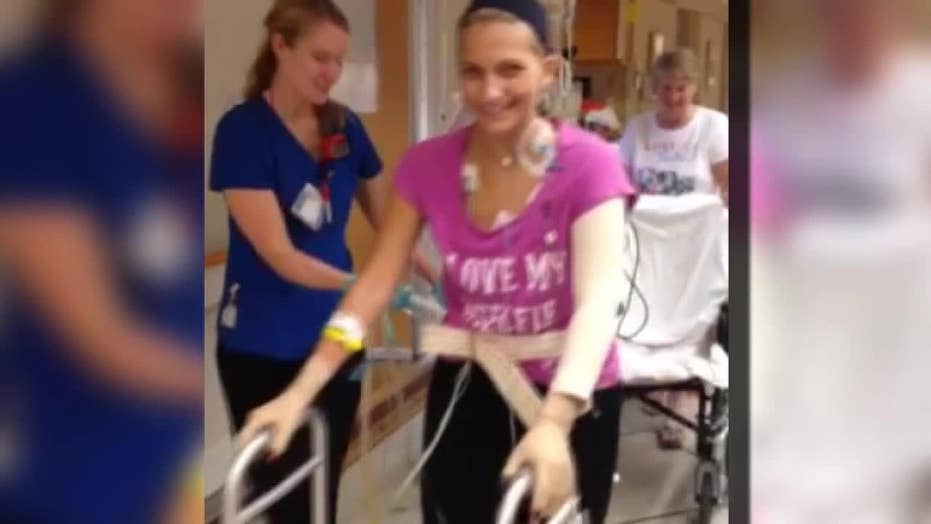 What started from a rug burn landed a Wisconsin woman in the ICU, resulting in the loss of multiple limbs.

A Wisconsin woman who tripped over her dog in June 2015 is still dealing with the ramifications of what seemed like a simple rug burn after she landed in the intensive care unit just days later battling internal bleeding and organ failure.

The fall, which had produced an entryway for a deadly bacteria to enter her bloodstream, initially cost Alecia Kennen parts of her fingers and all of her toes, but just a few months ago it ultimately also claimed her right leg from below-the-knee, Fox 9 reported.

Kennen, who is sharing her story with Fox 9 in hopes of warning others about the seriousness of Group A strep and toxic shock syndrome (TSS), told the news outlet that when she went to the hospital her nurse and doctors knew “right away that something was wrong,” but because her illness was so severe they initially couldn’t figure out what was causing it.

“If somebody sees this and is able to say, ‘Hey, I’ve never heard of it and I’ve heard of it now,’ and be aware of it, it makes a difference for me,” Kennen told Fox 9.

BLOOD TEST CAN PREDICT IF YOU'LL DIE IN NEXT 10 YEARS, RESEARCHERS CLAIM

Kennen told Fox 9 that while it was clear her body was dealing with a severe infection, it wasn’t until after her relatives had been told to prepare to say goodbye that one of her sons started complaining of a sore throat, which led to a life-saving clue.

All three of her sons tested positive for Group A strep, leading to her diagnosis of Group A strep toxic shock syndrome, according to Fox 9.

Group A strep can cause many infections, including strep throat, but also severe or even deadly illnesses, according to the Centers for Disease Control and Prevention (CDC). Patients with Group A strep can go on to develop TSS, which can cause high fever, chills, headache, fatigue, rash, vomiting, diarrhea, muscle pain, decreased liver function, and other serious health issues.

While TSS is typically associated with the use of super-absorbent tampons, it can also be caused by bacteria typically found on skin and can occur in both women and men of all ages. It is often life-threatening and requires medical attention and prompt treatment.

"It's the little things we take for granted that makes everyday life difficult now," Kennen, who according to KSTP is 37 years old, told the news outlet. Her community is hosting a fundraiser in her honor at the end of this month.