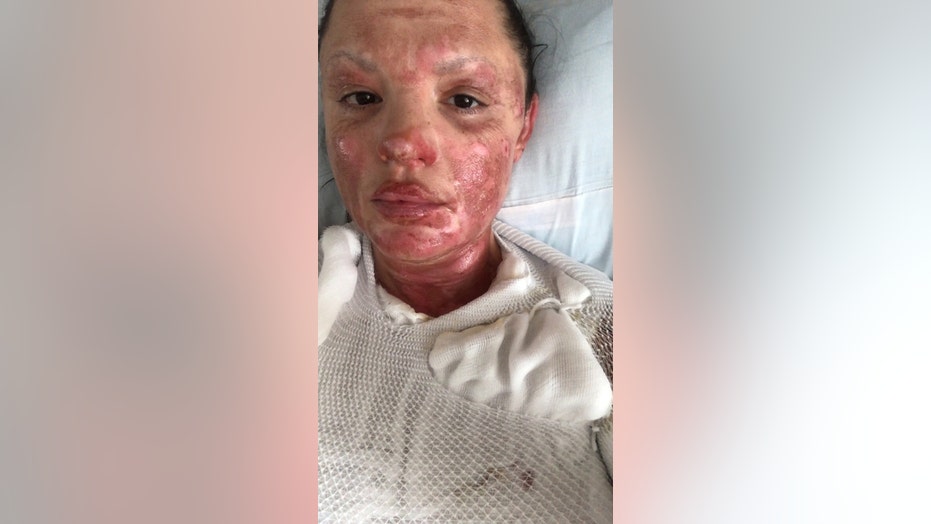 A North Carolina woman suffered life-altering burns this summer when a fireball escaped a gas grill that she was cleaning, scorching her face, arms and upper torso. Rebecca Rogers, 36, told JamPress that she had been letting the grill heat up to burn off the remaining bits of food from previous users while she prepared to clean it with a brush.

Rogers, pictured with her sons before the accident, said she is still dealing with nerve pain in her arms and legs.  (JamPress)

Rogers said she started screaming and ran into her friend's apartment, who rushed her to the emergency room. She was then transferred over two hours away to Jaycee Burn Center in Chapel Hill, where she spent a week recovering from the burns. While there, she told JamPress, she underwent skin grafts and removal of dead skin tissue.

“Now I am dealing with having to wear compression garments and removing them numerous times a day to put ointment on the burns,” Rogers, who said she is still suffering from nerve pain in her arms and legs, told JamPress.

She said she is still struggling with simple tasks and dreams of going to her son’s soccer games dressed normally again.

“I would really like to be able to wear shorts and t-shirts again,” she told JamPress. “But seriously, I would like to never have nerve pain in my arms and legs. To go back to normal. To be able to go to my son’s soccer games and not have to cover up with long sleeves and pants and an umbrella because I can’t be in the sun.”

Her recovery is expected to take between nine and 12 months.  (JamPress)

And Rogers, who said she used to model, has sworn off gas grills but is trying to remain positive in her recovery.

“Everything is in a constant movement of change,” she told JampPress. “So even though this has severely disrupted my life, I know that it won’t last forever. And if nothing else, this has taught me patience.”

Rogers said her recovery is expected to take between nine and 12 months, and that friends and family have stepped in to help her with groceries and laundry and other everyday tasks that have become difficult.