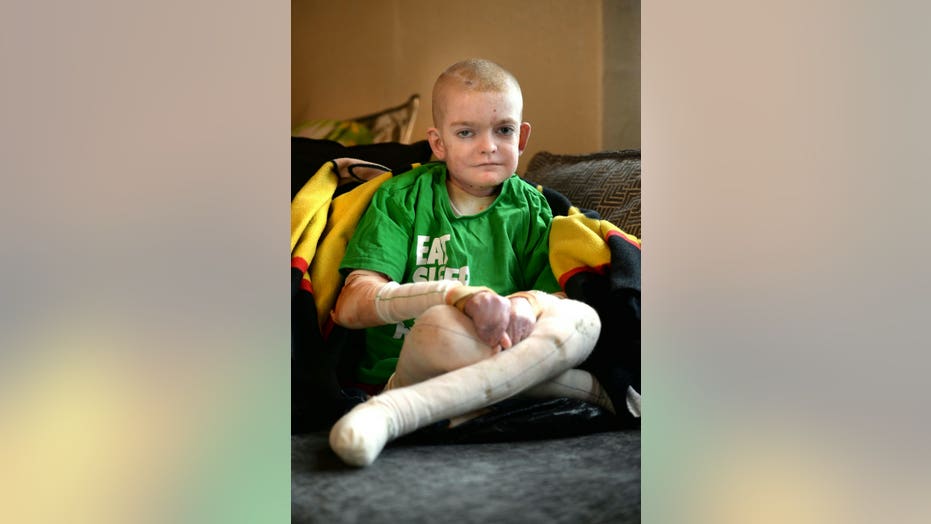 A desperate mother who said her teen son is at wit’s end after a lifetime of dealing with a rare skin condition that leaves him blistered and covered in painful sores is asking his supporters to send him birthday cards in an effort to raise his spirits.

“The last few months, he’s had enough of life,” mom Tanya Williams, of Lancashire, England told SWNS. “He’s had enough of being in pain with the sores. He just wants to give up, he doesn’t want to fight anymore. What do you do, as a mum?”

BOY, 12, SURVIVES 'FREAK' TRAMPOLINE ACCIDENT AFTER METAL SPRING SHOT INTO HIS BACK 'LIKE A BULLET'

Williams’s son, Rhys, was born with epidermolysis bullosa, a group of rare diseases that causes fragile, blistering skin that appears in response to minor injury including rubbing, scratching, or even adhesive tape. In severe cases, individuals may experience blisters inside the body, including the lining of the mouth or stomach.

Most types of epidermolysis bullosa, sometimes referred to as “butterfly skin,” are inherited, according to the Mayo Clinic. There is no cure, although mild forms may improve with age. Treatment typically focuses on caring for blisters and preventing new ones.

His mother said his life revolves around school, Xbox and sleep since he is unable to play outside with friends. (SWNS)

Severe forms of epidermolysis bullosa may cause fusion of fingers or toes, or abnormal bending of joints that can occur at the fingers, knees and elbows. Patients may have difficulty passing stool due to blisters, may experience dental problems, are at risk of infection and sepsis, and high risk of skin cancer. Infants with a severe form of the disorder are at an increased risk of death due to loss of body fluids, widespread blistering and issues breathing.

“He’s a happy boy most of the time but recently it’s a struggle to try and get through to him,” Williams told SWNS of her 13-year-old son. “I don’t think he can fight much longer, his life depends on this.”

Rhys, who turns 14 later this month and is into Xbox, now relies on a wheelchair because he is unable to straighten his legs. Williams said they change his bandages up to three times a day, and his fingers have become webbed, rendering him unable to play outside with friends and reliant on morphine for pain.

Williams said she got the idea to ask for birthday cards to be sent to him after seeing how well he reacted to a similar campaign during Christmas.

“Every single card he received, he opened them with so much joy,” she told SWNS. “He came home from school and he would see these Christmas cards. He got hundreds at a time. It showed him that he still needs to fight, that there’s people out there who do care and do love him. Hopefully, it can make him see that not everything is bad.”

For information on how to send Rhys a birthday card, click here.