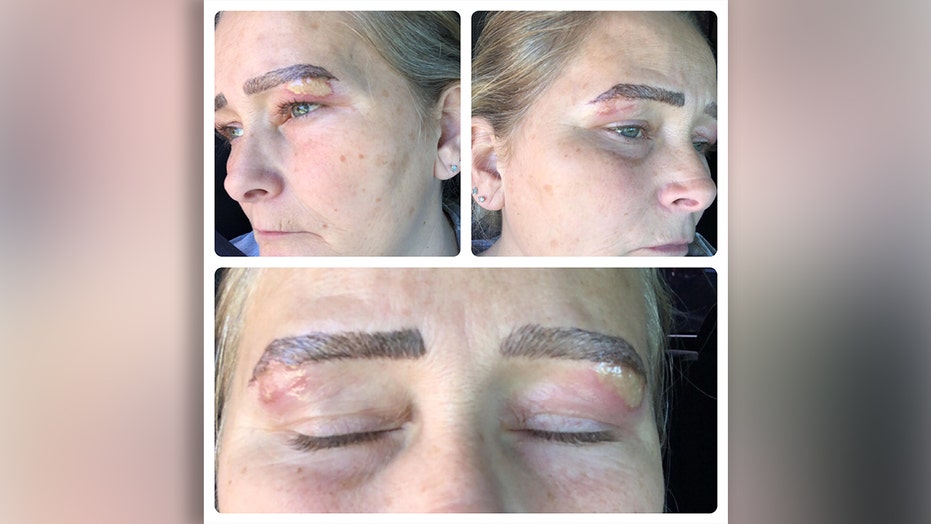 A Michigan woman claims she was left with infected blisters and scarring under her eyebrows after she booked an appointment for microblading at a local salon.

Shannon Bozell, who shared her before and after photos on Facebook, said she trusted the artist to choose the right shape and shade for her face, but that’s when “this nightmare began.”

Shannon Bozell of Michigan, pictured before and immediately after the mircoblading, said she trusted the artist to choose the correct shape for her face.  (Courtesy of Shannon Bozell.)

Microblading is a form of semi-permanent tattooing that uses tiny, fine-point needles to scratch and deposit pigment under the skin, according to Cosmopolitan. Bozell said in a Jan. 15 Facebook post that she decided back in October to invest in the procedure after over-plucking her eyebrows in her 20s.

However, Bozell was unhappy with the shape and shade of her eyebrows, prompting her to go back to have it corrected. When she did, she claims the artist “scraped” off the color, which led to infected blisters.

Shannon Bozell claims she went back to a salon where she had a microblading procedure to have her eyebrows reshaped, but left with blisters and scarring. (Courtesy of Shannon Bozell.)

“[Three] days after this nightmare began I returned to this salon so the artist could ‘scrape’ some of the color off and reshape them!” she wrote. “That’s when my eyebrows got infected and blistered real bad (I still have pink scars that are very visible) I’m getting them removed.”

Bozell said she decided to go public with her ordeal in a bid to warn others about the importance of asking questions and doing your research before opting for such procedures.

WOMAN WITH MASSIVE GROWTH ON ARM SAYS LUMP 'GETS HER DOWN,' HOPES TO HAVE IT REMOVED

“When I chose this artist I looked closely at her portfolio,” she wrote. “I didn’t ask many questions during the process as I thought she knew what would be best for me and my face shape! WRONG!!!! Make sure you read the [artist's] reviews. Huge mistake on my end! Artists can post pics of anything they want and say they did it.”

She said she now faces additional costs to have them fixed elsewhere. (Courtesy of Shannon Bozell.)

The salon where Bozell claims she booked the mircoblading did not immediately respond to Fox News’ request for comment.

“Learn from my mistake!” Bozell said, adding that she now has to pay an additional amount to get her eyebrows fixed elsewhere.