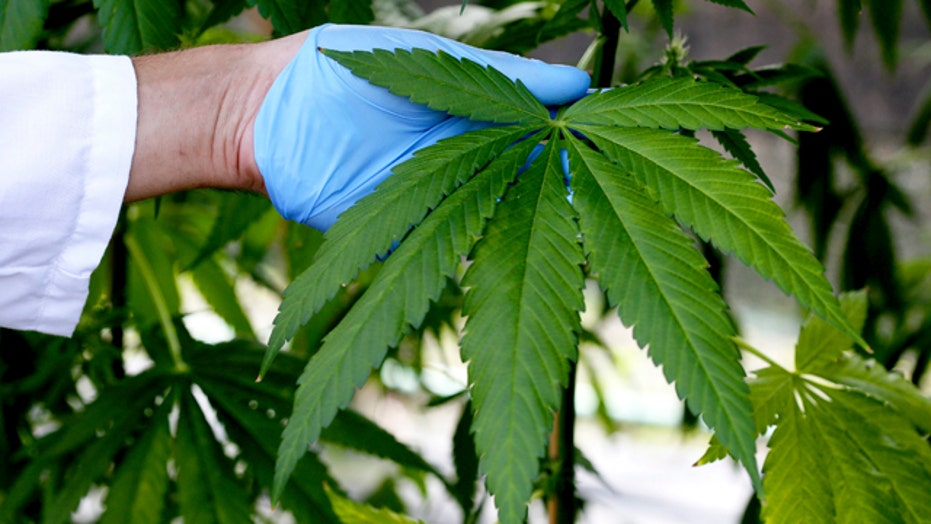 New research suggests marijuana may help protect the brain after a head injury -- something football players are all too familiar with. Former NFL star Marvin Washington and KannaLife Sciences CEO, Dean Petkanas sit down with Dr. Manny to talk about how the company is developing a cannabis-based drug for concussions

With America in the midst of a pot revolution, companies are lining up to jump on the medical marijuana bandwagon. But 99 percent of them don’t have the exclusive license from the federal government to commercialize a medical marijuana patent currently held by the National Institutes of Health (NIH).

The patent, called  “Cannabinoids as Antioxidants and Neuroprotectants,” was quietly filed in 2005 when scientists from the NIH found certain cannabis compounds had neuroprotectant properties, “for example, in limiting neurological damage following ischemic insults, such as stroke or trauma, or the treatment of neurological diseases, such as Alzheimer’s disease, Parkinson’s disease and HIV dementia.”

“I think the [NIH wanted] a public-private partnership … the government does a good job of using taxpayer dollars to foster research and development, and NIH is the largest laboratory of its kind in the world in terms of scientific research and development,” Dean Petkanas, CEO of KannaLife Sciences told FoxNews.com. “They don't want to develop drugs, but they'd like private interest such as ours to step up to the plate and say ‘We're gonna take some risk with you.’”

In 2013, Petkanas’ New York-based company, which specializes in the research and development of plant-derived pharmacological products, obtained the license from the NIH’s Office of Technology Transfer to bring a marijuana-based neuroprotective drug to the market.

“We've taken the preclinical approach so far to date on our first indication which is hepatic encephalopathy, which is a brain-liver disorder, where you do have neuronal degradation and degeneration, oxidative stress,” Petkanas said. “So we felt that we could look at that in parallel with chronic traumatic encephalopathy, (CTE) another brain-related disease, and see if neuroprotection would indeed be afforded across that panel.”

CTE is a progressive degenerative disease of the brain found in athletes with a history of repetitive head trauma. The condition garnered national attention with a rash of suicides in retired National Football League (NFL) players who were suffering from symptoms similar to those seen in patients with Alzheimer’s, or other neurodegenerative diseases.

To date, more than 4,500 retired players have filed suit against the NFL claiming that the league downplayed, dismissed and even covered up knowledge of the long-term neurological damage associated with repetitive concussions. The players acknowledge that while they expected some injury in playing the contact sport, they did not expect neurological damage fraught with symptoms usually experienced by aging dementia patients.

Petkanas hopes his company’s research will pave the way for the development of cannabidiol-based (CBD) drugs to help protect the brains of contact sports athletes.

CBD is one of at least 85 active cannabinoids found in cannabis that can be extracted from the plant for medical applications. In the United States, an orally administered liquid drug containing the compound was granted orphan status approval by the Food and Drug Administration (FDA)to treat a rare seizure disorder in children.

“We've found in some clinical research that cannabidiol, CBD, acts as a neuroprotectant, so in the parlance of pharmaceutical sciences, we could be using that as a prophylaxis against repetitive concussive injury,” Petkanas said.

To help raise awareness about the medicinal properties of CBD and its potential applications in the world of sports, KannaLife Sciences partnered with former NFL defensive lineman, Marvin Washington, who is part of the lawsuit against the league.

“I've seen some of the effects of the concussions and CTE with guys that I played with in my era,” Washington told FoxNews.com. “My son is a collegiate football player and this is for the quality of life of guys that are retiring, this is for protection of the current players and future players in the NFL and college. This just doesn't cover the former players -- the things that are happening in our lab are gonna cover everybody that plays a contact sport. It's gonna make the game safer.”

Washington acknowledged the NFL’s efforts over the past couple of years, and said that the tide started to turn after studies of hall-of-famer Mike "Iron Mike" Webster’s brain revealed the extent of neurological damage many players, both retired and current, are facing.

“They reconfigured the Head, Neck and Spine Committee, and now they have neurosurgeons and neuroscientists on there that are heading it, and they did this two years ago, so yes, the NFL is doing a good job the past couple years,” Washington said. “But they're saying they need to follow the signs -- we want them to lead the signs, because they're the biggest fish in the water out there.”

But even though NFL commissioner Roger Goodell said earlier this year that he would consider allowing the use of medical marijuana as a neuroprotectant if the science is there to back it up, the league has had a notoriously tough stance on pot.

A recent review of the league’s drug policy sought to institute blood testing for human growth hormone, strengthen the punishment for DUI arrests and reclassify controlled substances, but maintained the strict rules on marijuana as evidenced when Cleveland Browns wide receiver Josh Gordon received a 16 game suspension after testing positive for the drug – a punishment many have criticized in comparison to Baltimore Ravens running back Ray Rice, who was initially suspended for only two games after his arrest for assaulting his then-fiancée.

Washington argued that while the drug KannaLife Sciences is working to develop would cause a positive result on a drug test for an active player, CBD has no psychoactive effects. And, he added, research is piling up that shows the benefits – especially for football players – outweigh any negative stigma associated with marijuana.

“Everybody calls football a contact sport – it's a collision sport. And I know the story right now is domestic violence, but concussions and CTE ... this is not going away, because the players are getting bigger and faster and stronger, and so they need something to protect the head,” Washington said. “This is something that players are not going to get high off of or anything like that because it has no psychoactive effects.”

Petkanas said his company plans to file an investigational new drug application with the FDA in early 2015. But, he added, this is just the tip of the iceberg for medical marijuana.

“We're looking at a 15 to 20 year curve of really isolating some of these cannabinoids … and how they play a role in relieving stress in multiple diseases and disorders,” Petkanas said. “It interplays with our endocannabanoid system.”