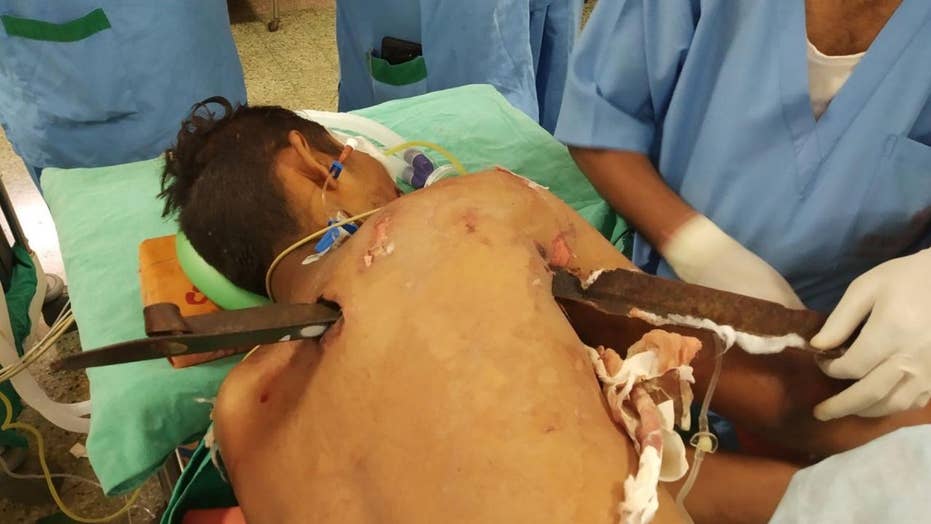 A driver in India miraculously survives being impaled by a 2.5-foot-long iron spike

A driver in India miraculously survives being impaled by a 2.5-foot-long iron spike.The motorist apparently collided with a pick-up truck, leaving him impaled on an iron rod.

A driver miraculously survived despite being impaled by a 2.5-foot-long iron spike, which went right through his body. The motorist, known only as Narendra, 20, was driving when he collided with a pick up truck, leaving him impaled on an iron rod.

Dr. Siddharth Lakhotia cardiothoracic surgeon said that the driver is lucky that he survived as he may have died on the spot seeing the gravity of the accident (SWNS)

The metal stick went through the right side of his chest and came out of his upper back, unsurprisingly injuring his lungs.

But medics spent three hours painstakingly removing the spike, and just days later he is up and walking, and is expected to make a good recovery.

Professor Siddharth Lakhotia, head of cardiothoracic surgery at BHU Trauma Centre said: "The accident was so severe. Because of this, there was a serious injury in the right lungs."

Just days later, Narendra was up and walking. (SWNS)

"Air and blood flooded the chest cavity. The local police provided the medical facility with great readiness," he said. "When this patient came to us, he was unconscious. It seemed almost impossible that he would survive. The only way to save him was to remove the rod by surgery and pray to God."

The accident happened on Friday in Machlisahar in Uttar Pradesh, India.

He also suffered injuries to his face, eye, and foot.

Professor S.K. Mathur, head of the anesthesia said the force of the accident caused the metal pole to bend after it pierced his chest, making the operation more difficult.