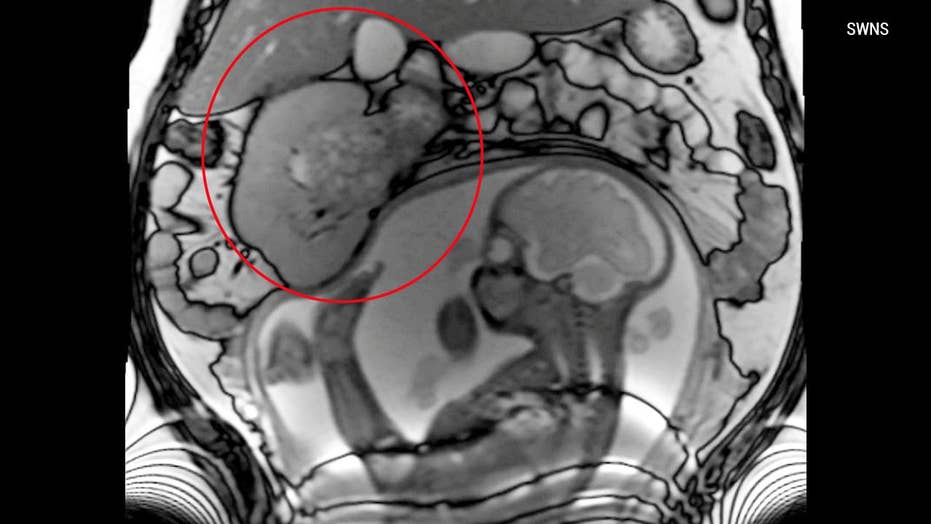 40-year-old Susan O'Flanagan was 20-weeks pregnant when the 14cm cancerous tumor was detected on her right kidney during a routine ultrasound.

A pregnant woman had a huge scare when a scan revealed she had a tumor “as big as her baby.”

During a routine sonogram, doctors discovered a 5.5-inch mass on the right side of Susan O’Flanagan’s kidney. She was 20 weeks into her pregnancy.

The mother from London described the discovery to SWNS.

“I didn’t have any symptoms from my cancer so if I hadn’t been pregnant I may not have found out about it until a later stage, “ the grateful mother told SWNS. (© Susan O’Flanagan / SWNS.com)

“It was only by chance that the sonographer saw the tumor because Archie was lying the wrong way around," she said, "so she needed to hold the ultrasound probe in a different position to measure his head.

"When she told me she’d seen a mass there, I was so scared,” she added.

Four weeks after giving birth to Archie, in June of last year, Susan had robotic surgery to remove her right kidney and the giant tumor. (© Susan O’Flanagan / SWNS.com)

Physicians would have to wait until after the baby was born to use CT scans and perform a biopsy to see if the tumor was cancerous.

The 40-year-old told SWNS, “There was a chance I would need to abort the pregnancy so that I could have surgery to remove the tumor quickly — it was a very worrying time.”

“Luckily, regular MRI scans showed that the tumor wasn’t growing so teams at Guy’s and St Thomas’ decided that it was safe for me to continue with the pregnancy while being closely monitored."

She described to SWNS what it was like carrying both the baby and the tumor.

“As the baby grew, and with the pressure from my tumor, it became increasingly uncomfortable and painful, and I felt ill all the time.” She even added, "One of the scans even showed the baby kicking the tumor.”

“I didn’t have any symptoms from my cancer so if I hadn’t been pregnant I may not have found out about it until a later stage, “ the grateful mother said.

While a typical pregnancy lasts about 40 weeks, the mother of three was induced at 34 weeks to give birth to Archie.

Four weeks later, in June of last year, Susan had robotic surgery to remove her right kidney and the giant tumor.

Surgeons used a robot’s "arms" to look down a small camera to see inside the patient and get a 3D HD view while they operated.

Dr. Ben Challacombe, urological surgeon at Guy’s and St Thomas’, said, “Kidney cancer is very rare in a young woman and this was more unusual still because Susan was pregnant.”

Susan’s cancer had not spread outside her kidney and her tests have come back all clear.