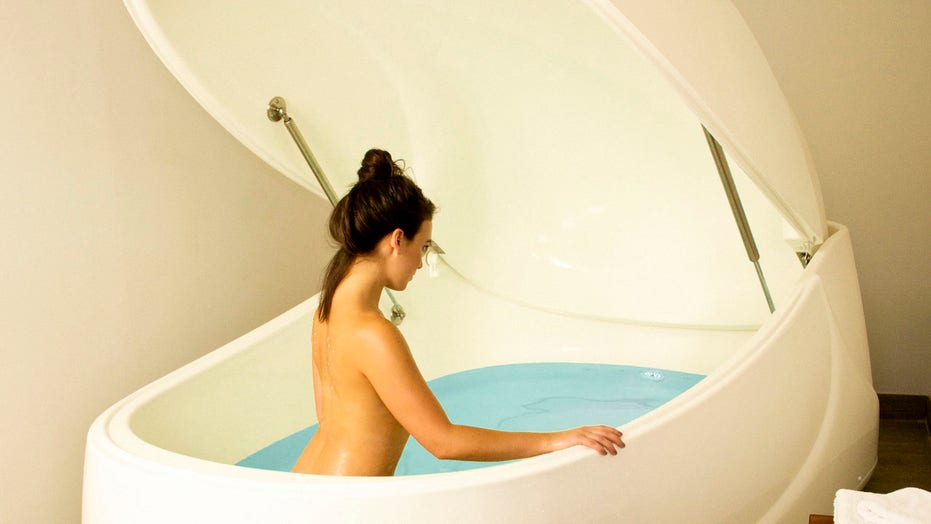 Could floating naked for an hour in a bath full of Epsom salt offer serenity? Floating, one of the latest alternative medicine trends is all about sensory deprivation and it may be the answer some people are looking for to ease stress and aches

Forty-eight-year-old Christine Jagde thought she had tried everything to relieve her debilitating migraines, until she stumbled upon a simple holistic therapy: floating in a tank.

"When I walked out of the float the first time, I felt relaxed, my headache felt better, and I thought, ‘OK this is something that I can do as a practice,’" Jagde, who works as an attorney in New York City, told FoxNews.com.

Floating, or flotation therapy, is one of the latest alternative medicine trends, and it works by depriving the senses to ease stress and aches. Over the past few years, more businesses that offer the therapy have emerged, and some companies are now selling personal tanks that can be used at home.

At Lift Floats in New York, clients float naked for one hour in a water tank filled with 250 gallons of water at body temperature and 1,000 pounds of Epsom salt.

“[It’s] a concentration of salt greater than the Dead Sea so clients float effortlessly,” Lift Floats co-owner David Leventhal, told FoxNews.com. "Most of our clients have the sensation of not being able to feel hot or cold. They literally can't tell if their limbs are above or below the water line."

Dr. Paul Hokemeyer, a psychotherapist based in New York City and Malibu, said when the mind is deprived of senses, it goes into a state of hyper-arousal.

“It generates a barrage of thoughts, feelings and emotions that emanate from both the conscious and unconscious state of being,” Hokemeyer told FoxNews.com. Questions that an individual may have during this heightened state of awareness include ‘Where am I’, ‘Why am I doing this?’ as well as questions with deeper conflicts of being like ‘Who am I?’, and ‘Am I safe, loved and lovable?’

Research on floatation therapy has been limited to small study groups, but some reports suggest floating can relieve muscle tension, enhance creativity and induce instant relaxation.

Dr. Teo Mendez, an orthopedic surgeon from Lenox Hill Hospital in New York, has floated three times before and said he was skeptical about its mental health benefits at first.

"For about 20 minutes, I was pretty bored, but then I started to get a little bit in-tune with my body,” Mendez told FoxNews.com. “I felt very creative afterwards, like I was easily able to solve problems. A lot of times in surgery, what we’re doing is trying to solve problems, and being able to think outside the box and think of new ways to do things is critically important, so it’s helped me in that way.”

Some floaters have reported the pitch-black and sound-proof environment can put them into a deep meditative state.

Busy professionals and entrepreneurs have also flocked to float centers across the nation in hopes of finding new ways to relieve stress. Mackie Yakaitis, founder of 11lemons.com, an on-demand dry cleaning and virtual closet app he launched last month, went to Cloud Aquatic Float Parlor in Waldwick, New Jersey, for a chance to get away and refocus.

“Launching a business can be stressful. It required me to be connected around the clock, so I was really looking forward to being able to completely unplug and disconnect from my devices for a bit," Yakaitis told FoxNews.com. “An hour without interruption felt extremely relaxing.”

Even famous athletes like Tom Brady and Stephen Curry reportedly float for muscle recovery, and a boost of focus and concentration.

“I get asked a lot by athletes and by patients about this, and I think the thing that really benefits them first and foremost is the lukewarm water that loosens up your muscles,” Mendez said. “Magnesium also— the Epsom salts dissolves into magnesium and sulfate, and magnesium is extremely important for your body. There’s a theory that some of the magnesium gets absorbed into your skin when you’re floating, and this can potentially aid recovery [and] decrease muscle soreness, whether it’s from working out or just from low back pain, stress, [or] tension in your shoulders.”

A study published in May 2006 in the International Journal of Stress Management found that participants with stress-related pain who floated for 12 sessions showed a decrease in pain, stress, anxiety and depression.

“It holds the potential to traumatize people who suffer from a host of chronic to acute mental health challenges like anxiety, depression, bipolar disorder and schizophrenia,” Hokemeyer said. “In addition, for people who struggle with an active borderline personality disorder, it holds the potential to cause great stress and is counter indicated.”

An hourlong float session typically costs between $60 to $100. At Lift Floats, a single session costs $99.