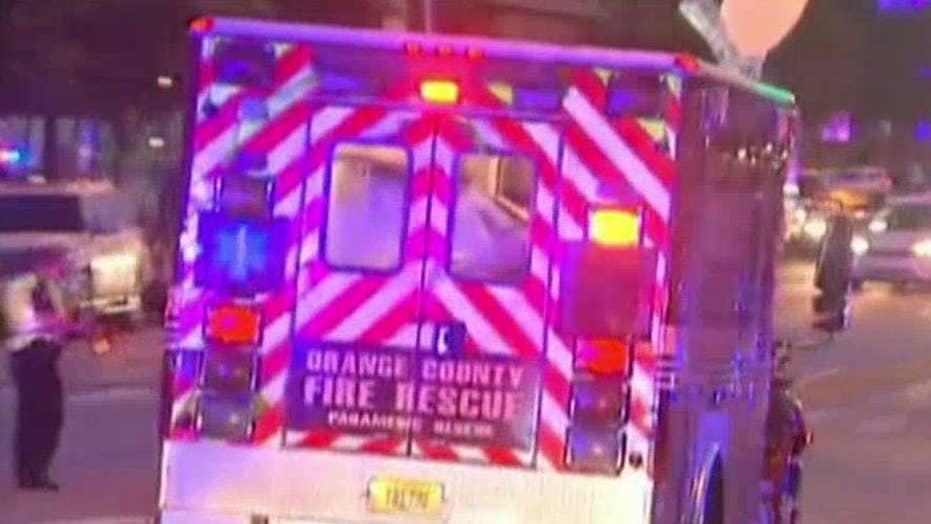 Many surviving Orlando victims in surgery for gunshot wounds

The hospital where 44 victims of Sunday’s deadly terror attack inside a Central Florida nightclub were taken said six patients have been discharged, while 29 remain hospitalized. The hospital also said that nine of the patients brought in following the massacre succumbed to their injuries.

Of those nine patients, the Orlando Regional Medical Center said “most arrived with no vital signs or profoundly ill.” The hospital also said that no patients have died since the initial nine on Sunday morning.

Dr. Michael Cheatham, chief surgical quality officer at Orlando Regional Medical Center said that six surgeries were planned for Monday after 26 were completed Sunday. The hospital said via Twitter that many of the wounded patients had high-velocity gunshot wounds and were transported to operating rooms to stop the bleeding. Some patients were awake and able to speak upon arrival.

The hospital added via Twitter that as of Monday doctors have been able to extubate half of the patients who went to the intensive care unit (ICU) on a ventilator, and are no longer giving major amounts of blood.

"Based on their outcomes, we are a very optimistic for our patients' prognosis right now," the hospital posted.

Six trauma surgeons had been called in on Sunday and were operating within one hour of the arrival of the first patient. Cheatham also said the hospital had about 200 family members of patients at the hospital, while staff worked to try to unite victims and family. Officials say 48 of the 49 victims killed have been identified.

“The devastating thing was watching family members learn that their loved one was not in the hospital and was therefore likely still in the club, unfortunately having died from this incident,” Cheatham told Good Morning America.

The hospital thanked community members who responded to a call for blood donations after the tragedy, saying that local blood banks have more than 600 units of blood on hand.

"Our hearts and prayers are with the PULSE nightclub victims and their families as we continue to work through this trying time together," Orlando Health said in a statement.

The hospital said via Twitter that staff prepares for situations "like these by doing trauma simulations weekly, with large-scale, city-wide simulations arranged as well."

Authorities have described ISIS-linked terrorist Omar Mateen as being “cool and calm” as he killed 49 people and took hostages in a bathroom at Pulse, a gay nightclub in Orlando that was hosting a Latin night-themed event. He began his deadly spree around 2 a.m. Sunday in a gun battle with a uniformed off-duty officer working security at the club’s entrance before turning his attack on club patrons. In addition to the victims killed, 53 more were injured. Many of the wounded suffered gunshots wounds to the trunk and abdomen.

After unsuccessful negotiations with Mateen, authorities launched a rescue operation that involved an explosive breach of the bathroom wall. An armored SWAT vehicle known as a BearCat was used to puncture a hole in the wall, which Mateen came through with guns in hand and began firing at officers, who shot and killed him.