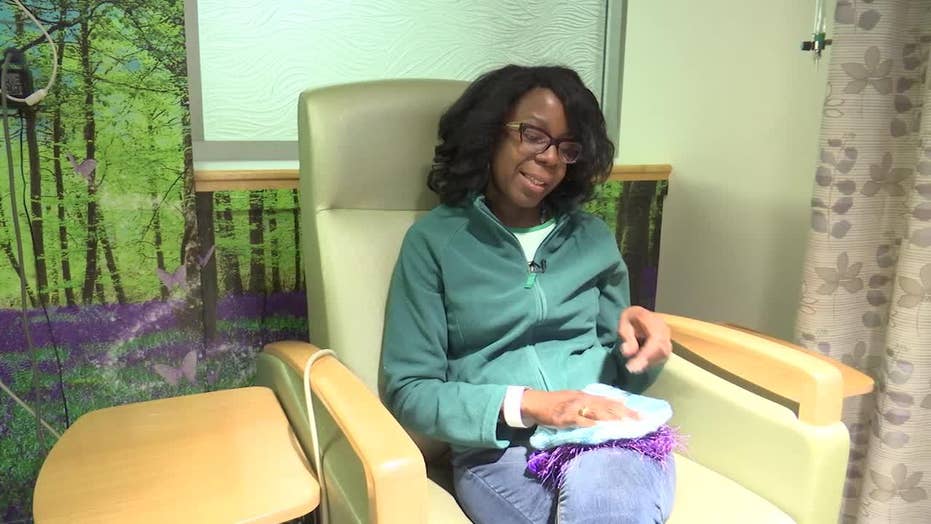 How volunteers are making a difference at a Pennsylvania hospital

Dr. Edda Fields-Black worked at Carnegie Mellon University until she was diagnosed with breast cancer.

“As it is for many women, it was quite a surprise,” she told Fox News.

Fields-Black has since taken a leave of absence to battle her illness, which she said has also been a tough journey for her two kids.

"One is a teenager one is in elementary school, and so they have their own takes on mom being sick,” she said.

But there’s a silver lining, she said, at Magee-Womens Hospital where she’s getting treatment.

Back in 2014, the hospital started taking volunteer knitters who made hats for patients.

"We had originally made baby hats and we have switched to chemo caps because unfortunately there’s a great need for them,” Dena Chottiner, founder of the volunteer knitters, said.

Those involved believe the hats are important because of the need it serves.

"I think the changes in body image with breast cancer—they’re really significant. You know, it’s hard, it’s hard," Fields-Black said of her treatment.

Chottiner said the knitters have volunteered more than 1,000 hours since the initiative first started. Organizers equated this to more than 3,000 hats made for patients at the hospital.

Their efforts haven't gone unnoticed by the patients.

“Just the outpouring of love and support that I’ve gotten from so many people--people I know, people I don’t know or didn’t know, people I’ve never met, like the knitters [is welcoming]", Fields-Black told Fox News.

And for those who hesitate to take a hat, Chottiner said she knows exactly how to entice them.

“I’d I say ‘You have to take a hat. I have to keep these ladies off the street and out of trouble,’” she joked.

"I’m just so happy that people, you know, use them, wear them, like them, comment on them, and that’s all part of it,” Chottiner said.