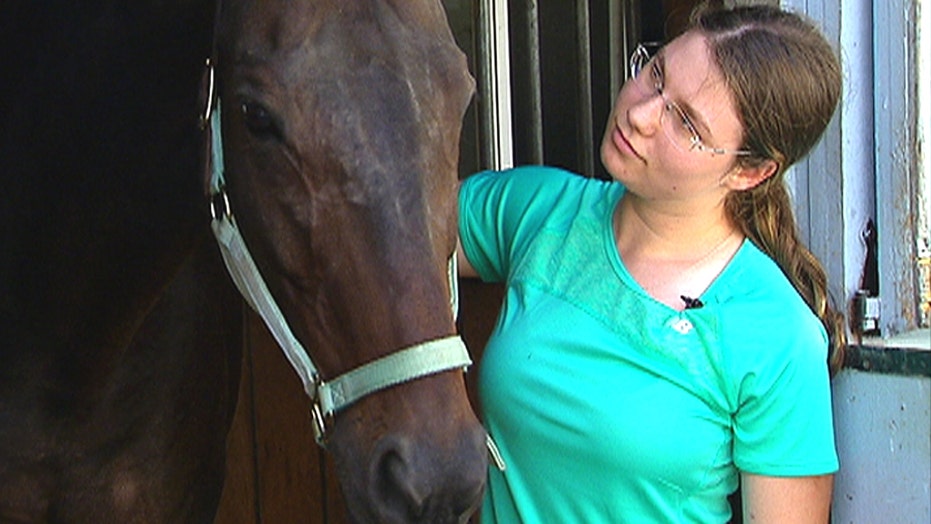 Could your teen have sensory processing disorder?

Sensory processing disorder (SPD) is a neurological condition that can make simple things like sound or touch become overwhelming. Young children can learn coping strategies in sensory gyms, but what about teens living with the condition?

When Joanne Sciortino brought her 8-month-old daughter Victoria home from a Russian orphanage, she knew something wasn’t quite right.

"From immediately being on the train and watching her rock herself in such a violent way— you knew she was trying to calm her body,” Joanne told FoxNews.com.

SPD is a neurological condition that causes the brain to process stimuli differently, and the condition has three subtypes. First, there’s sensory modulation disorder, wherein people have certain sensory cravings, or may be oversensitive or under-sensitive to stimuli such as hearing and touch. Other individuals may suffer from sensory discrimination disorder, which causes people to have difficulty distinguishing between sensory messages, like not being able to tell if a food is too sweet or salty, or understanding the tone of a funny joke. Last, there’s sensory-based motor disorder, which is marked by having problems moving or planning a sequence of movements like balancing and riding a bike.

“The brains and bodies of people with sensory challenges are wired differently,” Lindsey Biel, a New York City based occupational therapist and author of “Sensory Processing Challenges; Effective Clinical Work with Kids & Teens,” told FoxNews.com. “Certain sensory signals might come in too loud or too softly. If the information is not coming in a reliable, accurate way— or feels uncomfortable or painful in that person’s body— it’s going to interfere with function, and that’s when we start to talk about disorder.”

Studies suggest between 5 and 13 percent of preschool children are affected by SPD. However, SPD is not recognized as a disorder in standard medical manuals like the Diagnostic and Statistical Manual of Mental Disorders (DSM-5), in which more well-known disorders like depression and schizophrenia exist. Some experts believe SPD isn’t a separate condition, but a symptom of other ailments like autism or ADHD.

Sophie Molholm, an associate professor of pediatrics and neuroscience at Albert Einstein College of Medicine in New York, has been working on new research with a group of pure-SPD types (those who don’t have any other conditions like autism), to measure their brain activity and see if there are any major differences in sensory input and how they put together sensory input. Her preliminary evidence suggests children with SPD have a larger brain response to sensory stimulation than an age-match control group.

“But we can’t say why at this point,” Molholm told FoxNews.com. “It’s very tempting to say something like, ‘This is either the brain amplifying the response or failing to dampen the response,’ but that would be purely speculative. We still have a lot more work to do.”

For Victoria, challenges include an oversensitivity to touch. As a child, she refused to hold her mother's hand, and she continues to only wear soft and fuzzy fabrics because anything tight or scratchy agitates her. She also has vestibular challenges that make her crave constant movement, and she is hypersensitive to sound at certain pitch levels.

When Victoria was in grade school, fire alarms caused her physical pain.

“I used to be terrified of going to school just in case a fire drill went off,” Victoria told FoxNews.com. “I was young, so I didn’t know what was going on other than it was loud and painful. In order to get away from the overloaded stimuli, I used to hide in closets at school in my kindergarten classroom.”

While there is no known cause or cure for SPD, it's often managed through occupational therapy (OT) using a sensory integration approach (OT-SI).

OT sessions typically begin with an initial assessment including a sensory challenge questionnaire to uncover which senses are problematic, followed by sensory-modulating activities to reduce the patient’s over-reactivity to sensory input. For children, this can include wheelbarrow walking, arts and crafts, or resting with weighted blankets. But having playtime in sensory-type gyms is not always appropriate for older children and teens, so different tactics are needed as they age.

“There is a lot of cognitive work involved when you’re older. Mostly it’s physical activities that change the neurological system,” Carol Kranowitz, author of “The Out of Sync Child Grows Up,” told FoxNews.com. “They need heavy work activities, so sports are helpful; swimming, track, martial arts is good for kids who don’t want to be touched.”

Victoria started OT work with Biel twice a week when she was 15 months old. Biel taught Joanne and Victoria how to recognize when Victoria’s senses were starting to overload and mechanisms to help soothe her. Victoria stopped her OT work with Biel six years later, when her family moved to Scarsdale, New York. But as Victoria entered adolescence, she soon discovered that horseback riding was just the type of sensory solution she needed. Horseback riding forced Victoria to control her body, process multistep directions and destress.

"It’s helped me get that sensation of kind of being able to relax and breathe for a bit, and not have to worry about everything else going on, because at that moment it's just you and the horse," Victoria said.

Long-term OT-SI goals are aimed at teaching people how to self-regulate when their senses become overwhelmed.

"By the time a child is school-aged, [in] middle school, certainly a teenager, I want that child to be able to self-advocate. To really have the self-knowledge to say, ‘This hard for me’, ‘This is what I can do,’ ‘This is how I can overcome it,’" Biel said.

While some doctors and school teachers remain skeptical about SPD and claim that some kids are just fussy or shy, Joanne says the most important thing to remember as a parent is to trust yourself.

"You’ll still get a lot of pushback because SPD isn’t in a classified [medical] listing yet, but the effects on your child— and how it affects them day to day and in school and in relationships— is very real," she said.