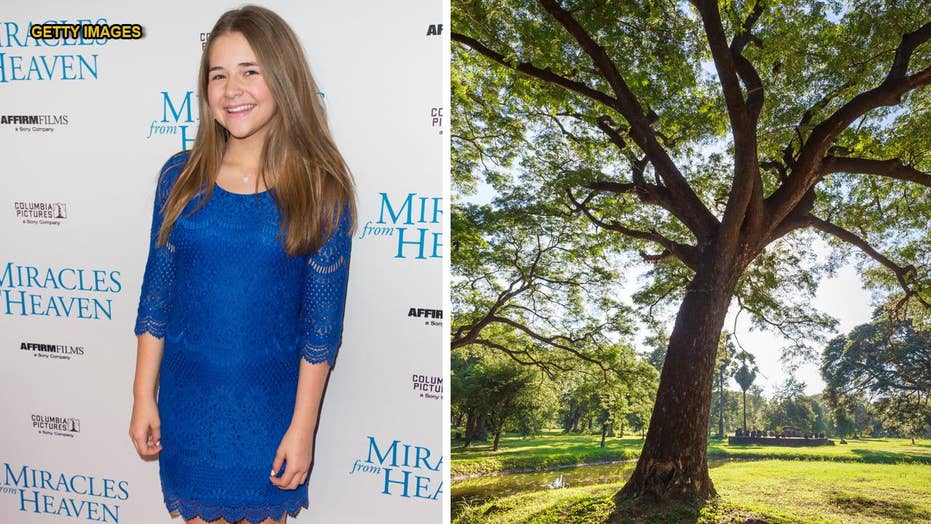 Girl claims she went to Heaven after tree fall, cured of chronic illness

Medical Mysteries and Marvels: Annabel Beam was diagnosed at age 5 with pseudo-obstruction motility and antral hypomotility disorders, severe gastrointestinal disorders that caused distension and pain after eating. But after a 30 foot fall inside a hollowed-out tree, Annabel says she saw Heaven and claims that Jesus told her He had plans for her on earth. Additionally, Annabel's digestive problems had seemingly been cured.

At just 5 years of age, Annabel Beam was diagnosed with multiple severe gastrointestinal disorders that caused distension and pain after eating.

Annabel felt so bad most of the time that she once told her mother, Christy Beam, she would like to die and go to heaven.

Then one day, Annabel experienced a life-changing event. She and her sister were climbing a tree when the branch gave way. Annabel landed inside the hollowed-out tree in what could have been a fatal fall.

Firefighters worked for five hours to get her out of the tree. But during that time, Annabel says she saw heaven, Jesus and even her Mimi who had died several years before.

Annabel claims that Jesus told her He had plans for her on earth. He told her she wouldn’t have any stomach problems after she got out of the tree.

The girl had fallen 30 feet headfirst—so it was miraculous that she had even survived the fall.

However, following the accident, Annabel’s mother noticed her daughter wasn’t asking for medication as often, Christy told Inside Edition.

After going back to the pediatric gastroenterologist, the doctor simply “released her from his care,” Christy said. “She was cured.”

Annabel’s previous illnesses were called pseudo-obstruction motility and antral hypomotility disorders. In other words, her stomach muscles were too weak for proper digestion. In addition, symptoms often mirrored an intestinal obstruction without any actual blockage.

According to the National Institutes of Health, the pseudo-obstruction was likely related to nerves, muscles or cells not performing correctly.

Now, Annabel doesn’t have any digestive problems at all. She can eat her choice of food without pain or medication, Christy told Fox News. It was truly a miraculous healing.

Christy Beam recounts her daughter’s story in a book called Miracles from Heaven: A Little Girl and Her Amazing Story of Healing. The story is also a movie produced by Sony Pictures, starring Kylie Rogers as Anna Beam and Jennifer Garner as her mother, Christy.