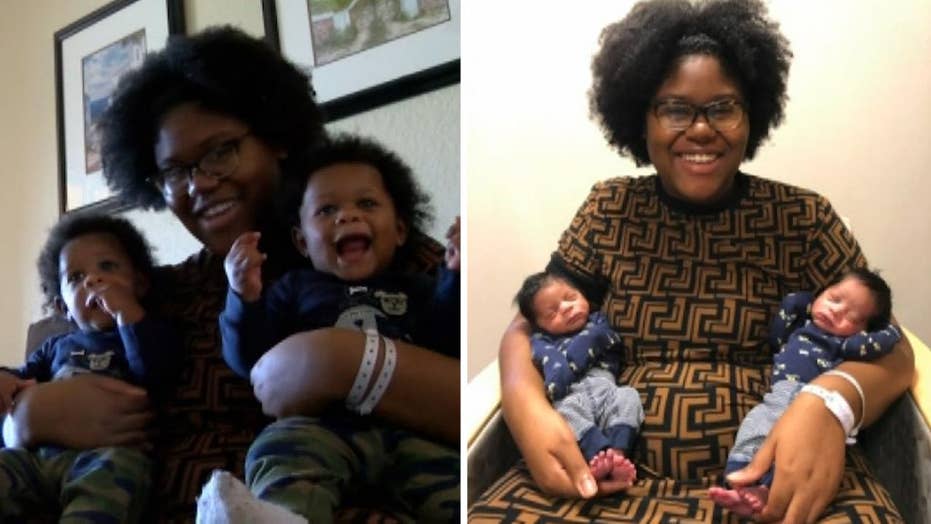 Doctors say Florida woman had better chance of winning the lottery than giving birth to two sets of twins in one year.

A Florida mom who gave birth to twins twice in one year said she didn’t even know multiples ran in her family until after she welcomed her four boys in 2019. Alexzandria Wolliston first welcomed Mark and Malakhi in March, she told WPTV.com, and then unexpectedly found out in May that two more were on the way, with all four conceived naturally.

“I’m like, ‘Oh my gosh, I never thought I would have two,’” Wolliston, who also has a toddler daughter, told the news outlet.

Mark and Malakhi were born in March, while Kaylen and Kaleb made their debut on Dec. 27. (Alexzandria Wolliston)

In late December, Kaylen and Kaleb joined their brothers Mark and Malakhi, and shortly after Wolliston found out that both of her grandmothers lost twin boys at birth, making her additions all the more special.

WOMAN MISTAKENLY TOLD SHE HAS CANCER AFTER TYPO IN HOSPITAL LETTER

“I always say that I feel like my grandmothers gave me their kids because two sets of twins and their twins passed away,” she told the news outlet. “I feel like they just sent them down for me.”

Wolliston said that while Kaleb was recently able to join his three siblings at home, she’s hopeful that Kaylen will also be released from the NICU soon.