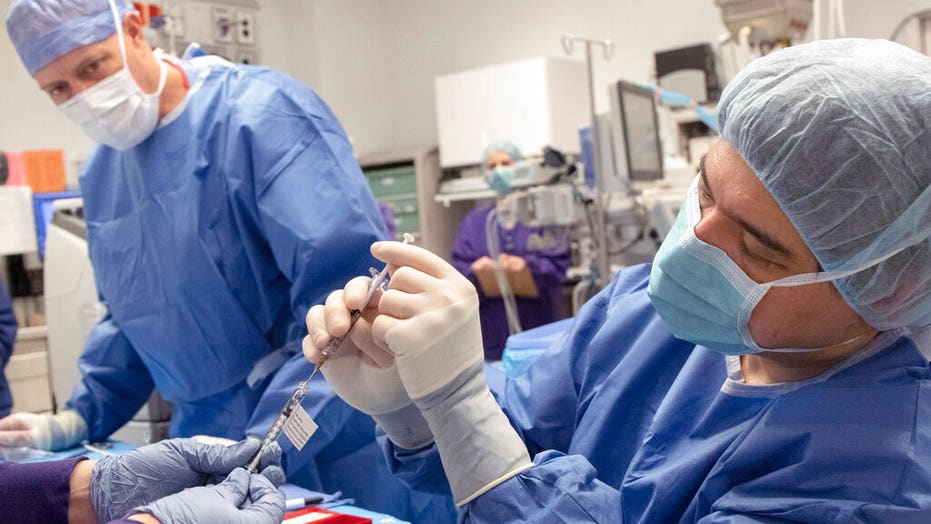 The gene editing tool CRISPR has been used to treat a patient with an inherited form of blindness, an operation which, if successful, will open up a new frontier for treating diseases, scientists say.

A blind patient recently had the procedure at the Casey Eye Institute at Oregon Health & Science University in Portland. It may take up to a month to see if it worked to restore the patient’s vision. If the first few attempts seem safe, doctors plan to test it on 18 children and adults.

Dr. Andreas Lauer, right, prepares to perform the first-ever in vivo CRISPR gene edit procedure for the BRILLIANCE clinical trial at the school's Casey Eye Institute in Portland, on a patient who had an inherited form of blindness. I (OHSU via AP)

"We literally have the potential to take people who are essentially blind and make them see," said Charles Albright, chief scientific officer at Editas Medicine, the Cambridge, Massachusetts-based company developing the treatment with Dublin-based Allergan.

Doctors first tried in-the-body gene editing in 2017 for a different inherited disease using a tool called zinc fingers. Many scientists believe CRISPR is a much easier tool for locating and cutting DNA at a specific spot.

The people in this study have Leber congenital amaurosis, caused by a gene mutation that keeps the body from making a protein needed to convert light into signals to the brain, which enables sight.

Scientists can't treat it with standard gene therapy so they're aiming to edit or delete the mutation by making two cuts on either side of it. The hope is that the ends of DNA will reconnect and allow the gene to work as it should.

"Once the cell is edited, it's permanent and that cell will persist hopefully for the life of the patient," because these cells don't divide, said Dr. Eric Pierce at Massachusetts Eye and Ear.

Doctors think they need to fix one-tenth to one-third of the cells to restore vision. In animal tests, scientists were able to correct half of the cells with the treatment, Albright said.

Doctors say the eye surgery itself poses little risk, with infections and bleeding being rare complications.

One of the biggest potential risks from gene editing is that CRISPR could make unintended changes in other genes, but the companies have done a lot to minimize that and to ensure that the treatment cuts only where it's intended to, Pierce said.