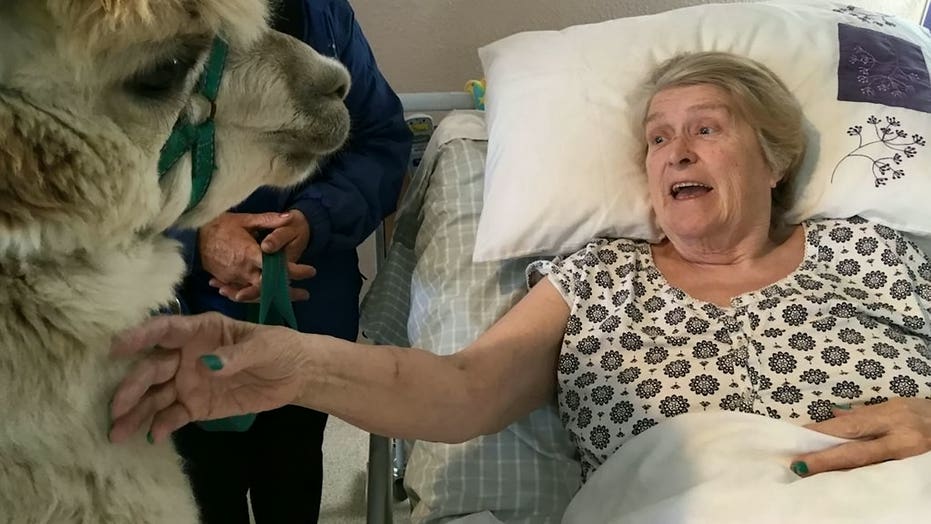 The emotional moment a dying woman was granted one of her last wishes to meet an alpaca was captured in a series of touching photos. Helen Hancox reportedly has just days to live because of a brain tumor.

But she recently saw one of the animals on a television program from the bed of her home and said she would like to pet one.

Helen Hancox met Cosmo in her home after she saw an alpaca on TV and told her daughter she wanted to pet one. (SWNS )

Hancox' s daughter, Jackie, put an appeal out on social media to see if somebody could get one to come to the house where her parents live.

Hancox loved every second of the visit, and pet the lovable animal while chatting away to him. Her eyes reportedly lit up as Meakin brought him to her bedside.

Hancox found out she was suffering from a brain tumor after fracturing her hip in April. (SWNS)

"You are lovely," she told him.

Hancox's husband Colin, daughters Jackie and Cat, and grandson Dan were on hand to watch the encounter.

He remained calm throughout the exchange, with Meakin saying he was clearly relaxed.

She has taken alpacas into schools and hospitals homes before but said the trip to see Hancox was something of a one-off. Hancox said it was the first time she had seen an alpaca, which is related to camels and originates from South America, at close quarters.

She was delighted when Meakin gave her a miniature model of Cosmo to keep.

Still addressing Cosmo, Hancox said he was able to “make things wonderful for people, even for me”.

She added that seeing and touching an alpaca had been ''10 times better” than seeing one on the TV.

Just before Cosmo left, she told him: “I’m very happy to have met you. You won’t half make me remember you.”

Then she said: “That was incredible, fabulous. Well done Jacks.”

Hancox fractured her hip in a fall on April 5 and scans revealed she was suffering from a brain tumor.