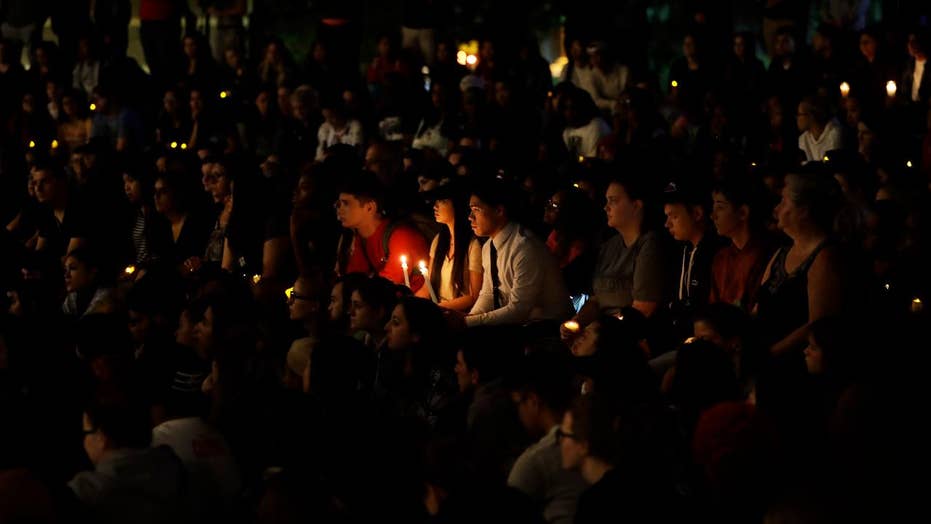 'Fox & Friends' pays tribute to those who died trying to save others.

Witnesses have come forward to speak about the heroes who risked their own lives to turn back into a crowd of concert-goers in an effort to render first-aid and save others as a crazed gunman sprayed hundreds of bullets on them from the windows of a nearby high-rise hotel room.

“There were so many people out there that you wouldn’t think they would be helping others at a time like that, but it wasn’t an 'every man for himself'-kind of situation,” Tiffany Michelle, a witness to Sunday’s massacre, told Fox News. “Everybody just sort of grabbed somebody around them and tried to do everything they could to get others out.”

Many of the selfless heroes are among the 59 killed and 520 people injured, including a nurse and two firefighters who were shot while protecting others.

Sunny Melton, a 29-year-old nurse at Henry County Medical Center in Paris, Tenn., was attending the Route 91 Harvest Festival with his orthopedic surgeon wife when the shots rang out. Melton stood behind on his wife and pushed her forward to run away from the gunfire before he was fatally shot in the back.

Travis Phippen, an EMT, was shot and injured while trying to revive his father, John, who was fatally wounded in the deadliest mass shooting in modern U.S. history. Phippen is still hospitalized but is expected to recover. Off-duty firefighter Kurt Fowler, of Lake Havasu, Ariz., was shot in the lower right leg while protecting his wife, and is recovering in a hospital.

“They heard the gunfire, him and his wife. Kurt took his wife to the ground and was shielding her and then was struck in the leg,” Steve Bunn, Erickson and Desert Hills fire captain and union president, told AZFamily.com.

Los Angeles fire captain, Mark McCurdy, was attending the concert with his wife and sister-in-law and managed to carry his injured in-law back to their room at the Mandalay Bay Hotel before turning around and heading back out to help others. His friend, fellow firefighter Steve Keys, was shot in the chest and wounded while performing CPR on another victim.

“Prayers needed. Lot of people hit. A lot killed. Was doing CPR on a woman in the concert when I got grazed,” Keys posted to Facebook, alongside a video of the chaos. “I’m OK. But a lot of people aren’t. I am lucky. Stayed behind on the street to help people.”

Mike Cronk, a retired teacher, told ABC 13 that many able-bodied witnesses, with and without first-aid training, banded together to carry victims toward first-responders. Cronk himself used his shirt to stop the bleeding after his friend was shot three times. He described a woman who helped him push his friend under the stage to safety.

Russell Black described seeing police officers fearlessly charge into the gunfire despite knowing that they didn’t have the weapons to go up against the automatic gunfire.

“I want people to understand that what these men and women did, even the slightest distraction, kept countless [deaths] from happening,” he said. “Hundreds of rounds, there was no escaping. There were 10-foot fences, we were trapped. It was a kill zone.”

Michelle, who thanked first responders and the bravery of strangers in a lengthy Instagram post after she was reunited with her husband and group of friends, described the moment her boot got stuck on the fence and how a stranger helped her get free.

“He was very helpful. I don’t know if I would’ve been able to get it unstuck without him,” she told Fox News. “I’m just so thankful that somebody was there.”