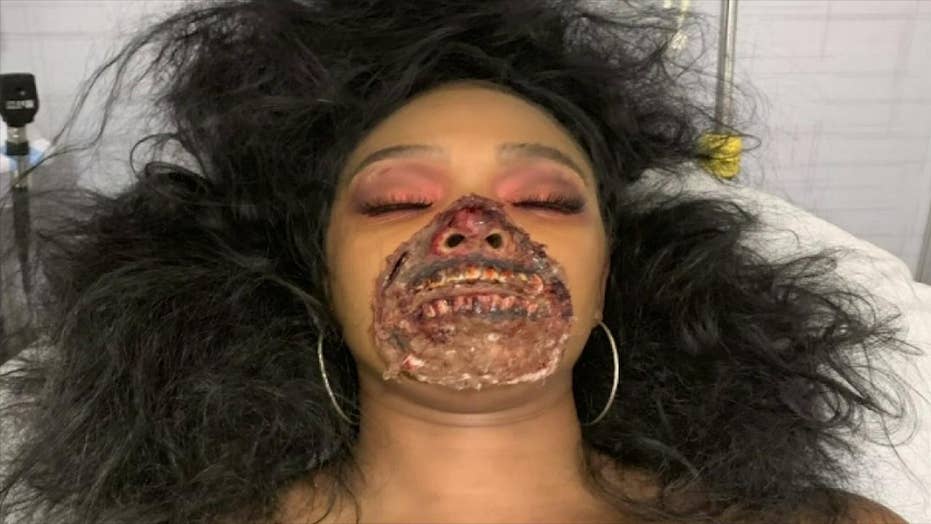 Jai Fears suffered a panic attack and was rushed to the emergency room still in makeup.

A Michigan woman reportedly caused quite a stir in the emergency room on Monday night when she arrived to be treated for a panic attack while covered in grisly Halloween makeup. The makeup, she claims, was mistaken for an actual medical emergency and she began being prepped to enter trauma.

Fears, who was suffering from a panic attack, did not expect staffers to think that her makeup was real. (Fox 2 Detroit)

“[They said] ‘Let’s get her back to trauma now,’ and ‘She’s probably going into shock, she’s not making any sense,’” Jai Fears, a back-up dancer who had undergone three hours of make-up work to create her grisly look, told Fox 2 Detroit.

Fears said she landed in Beaumont Royal Oak Hospital after suffering a panic attack while getting ready to do a photoshoot for Glam Gore.

“It just shot up to my brain and it just caused like a really bad reaction,” she told Fox 2 Detroit.

She said she had spent about three hours getting ready for the photo shoot when she suddenly started to panic.  (Fox 2 Detroit)

But when she arrived, she didn’t expect to have to explain her appearance to hospital staffers.

“They have to know!” she told Fox 2 Detroit, of her purported facial trauma being fake. “So no, I did not say anything because I just assumed they could see that it was fake.”

The hospital told Fox 2 Detroit that it could not comment on Fears’ case specifically, but did release a statement.

“The emergency room is not a place for fun and games,” a spokesperson told the news outlet. “They see many patients with severe medical issues where lives are at stake. Doctors need to be able to focus on those patients with true emergencies.”

Fears was sent home the same day. In a follow-up post on Facebook Fears emphasized that while the reaction was humorous, anxiety is not.

“Let me please say anxiety is no joke or laughing matter,” she wrote on Tuesday. “It was a serious situation that happened at a strange time.”

According to the Anxiety and Depression Association of America, it is estimated that nearly 40 million people in the U.S. experience an anxiety disorder in any given year. Additionally, the World Health Organization (WHO) estimates 1 in 13 people globally suffers from anxiety.