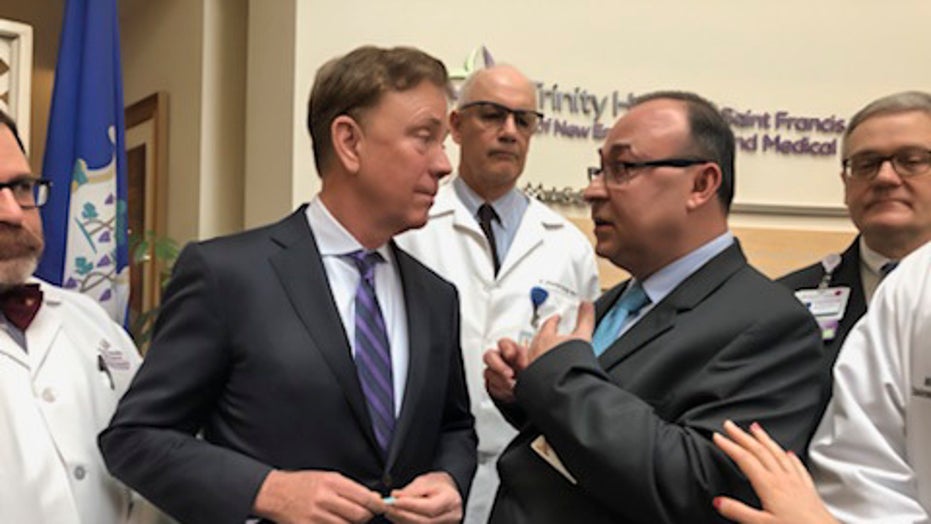 HARTFORD, Conn. – The first Connecticut resident has tested positive for the new coronavirus and is being treated at a Danbury hospital, Gov. Ned Lamont announced Sunday.

The Wilton resident, between 40 and 50 years old, is believed to have contracted COVID-19, the disease caused by the novel coronavirus, on a recent trip to California, Lamont’s office said in a statement. “Extensive contact tracing” is being done and anyone who has had direct contact with the patient is being told to self-quarantine at home.

Connecticut Gov. Ned Lamont, second from left, listening to Dr. Danyal Ibrahim of Trinity Health Of New England, second from right, after a news conference about the state's response to the new coronavirus at St. Francis Hospital and Medical Center in Hartford, Conn. (AP)

With the virus spreading inside the U.S., including the neighboring states of New York, Massachusetts and Rhode Island, officials had said it was a matter of time before it was detected in Connecticut.

“We have been expecting for some time that a Connecticut resident would become infected with COVID-19, so this should not come as a surprise to anybody,” Lamont said.

Officials said 29 people have had negative tests at the state lab and eight test results are pending.

The case is not related to the COVID-19 case of a Danbury Hospital employee who is a New York state resident, nor that of a community physician from New York state who made rounds at Bridgeport Hospital, Lamont’s office said.

Connecticut’s largest hospitals have been taking steps to plan for what state health officials have predicted could be similar to a bad flu season.

The hospitals are developing plans to set up tents and offices away from emergency rooms where people with symptoms such as fever, cough and shortness of breath could be evaluated and isolated from other people, officials said.

STATE DEPARTMENT: AMID CORONAVIRUS RISK, AMERICANS 'SHOULD NOT TRAVEL BY CRUISE SHIP'

The risk from the virus remain low in Connecticut, Dr. Matthew Cartter, the state epidemiologist, said Friday. Measures such as washing hands and social distancing were adequate, he said, and there was no need to avoid gathering in large numbers.

Connecticut has the capacity to test 15 to 20 people a day for the virus, with a kit that can do a total of 500 tests, Connecticut Public Health Commissioner Renée Coleman-Mitchell said Friday. Connecticut is expecting more test kits from the federal government, officials said