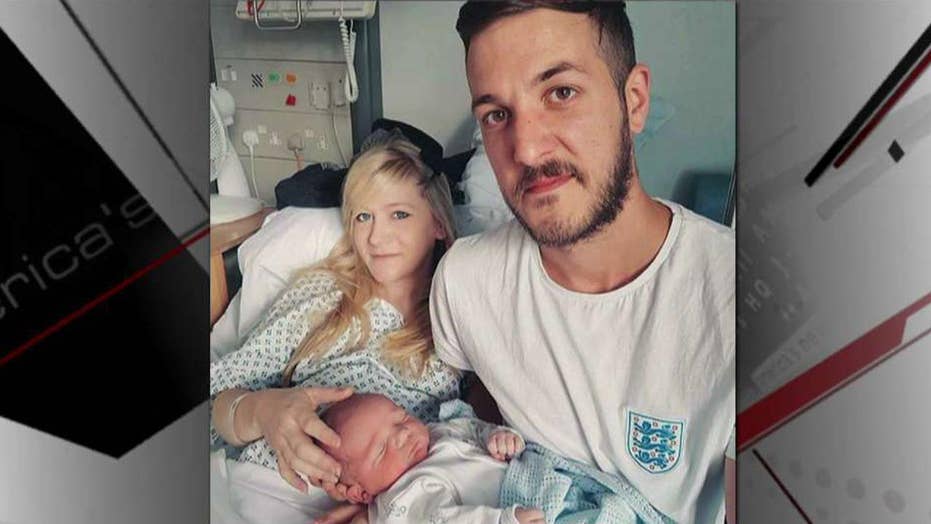 Charlie Gard's parents deliver petition to bring son to US

The parents of terminally ill 11-month-old Charlie Gard said on Sunday their son "deserves a chance" to be taken to the U.S. for an experimental treatment that could improve his condition.

Connie Yates and Chris Gard spoke outside London's Great Ormond Street Hospital, where Charlie has been kept since November, after delivering a petition signed by more than 350,000 people urging the hospital to allow the baby to be taken to the United States.

"He's our son, he's our flesh and blood and we feel that it should be our right as parents to decide to give him a chance at life," Yates said. "For a medication that is just an oral medicine, no known major side effects, you know, there is nothing to lose. He deserves a chance."

This is an undated hand out photo of Chris Gard and Connie Yates with their son Charlie Gard provided by the family, at Great Ormond Street Hospital, in London. The president of the United States has offered to help. The pope is willing to have the Vatican hospital take him in. Some 1.3 million pounds ($1.68 million) have been raised to help him leave Britain for treatment. But little has changed Tuesday July 4, 2017, for Charlie Gard, a terminally-ill British infant suffering from a rare genetic disease that has left him severely brain damaged. (Family of Charlie Gard via AP) (AP)

Charlie's father said there is no evidence he has "catastrophic brain damage," adding, "He should have had this chance a long time ago. They said it wasn't fair to leave him on a ventilator for three months with a treatment that they didn't think was going to work, he's now been left for seven months with no treatment, so he could have had it twice over. He deserves this chance at last and hopefully we will get it."

Charlie's case is expected to be back in Britain's High Court on Monday. The hospital requested the hearing because of new medical information from researchers at the Vatican's children's hospital suggesting experimental treatment might possibly be useful.

U.S. lawyer Catherine Glenn Foster, who is helping the family, said Sunday, "this new evidence involves the therapy itself and the percent success rate, and the likelihood that it will significantly help Charlie."

Connie's mother had called on Theresa May to help, but Justice Secretary David Lidington told Sky News that although the case is "heart-wrenching" the government has "no role to play."

CHARLIE GARD: WHY HIS STRUGGLE MAY SOON BE OURS

"It is right that judges interpret the law, independently and dispassionately," he said. "As ministers and as a government we have no role to play in the Charlie Gard case, as would be the case in any other proceeding in court."

Charlie inherited the faulty RRM2B gene from his parents, which affects the cells responsible for energy production and respiration, leaving him unable to move or breathe without a ventilator. The therapy he has been offered is not a cure.

Unless the court hearing produces a change, the hospital is barred by a series of court decisions from allowing the baby to be taken elsewhere for treatment.

Two American congressmen have added their support and are trying to offer the Gard family the chance to become U.S. residents.