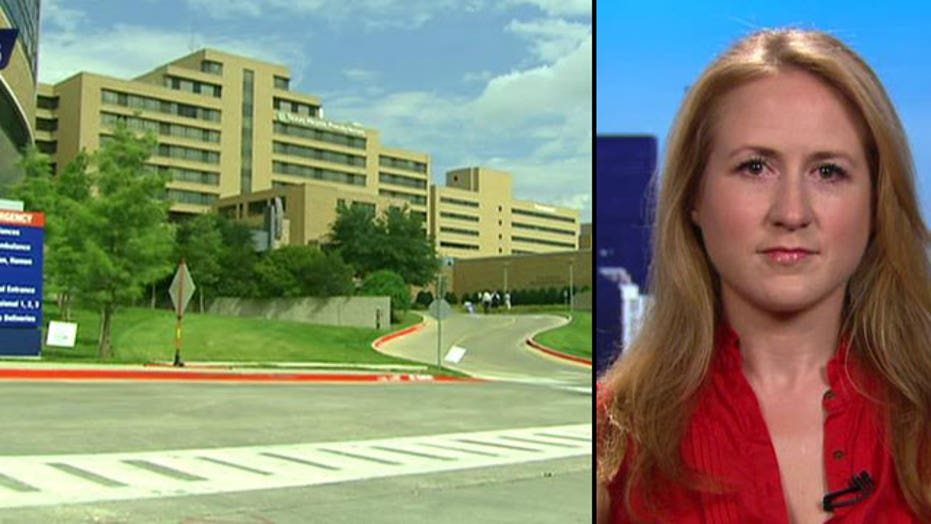 The CEO of the parent company of the Dallas hospital where two nurses have contracted Ebola from a patient who died there earlier this month has apologized for some aspects of the hospital's response to the deadly virus.

Texas Health Resources CEO Barclay Berdan issued the apology in the form of a full-page letter published in Sunday's editions of The Dallas Morning News and the Fort Worth Star-Telegram.

In the letter, Berdan thanks the staff at Texas Health Presbyterian Hospital for their "dedication, compassion, and tireless work" before acknowledging that "as an institution, we made mistakes in handling this very difficult challenge." Among those mistakes are hospital staff not communicating that Ebola patient Thomas Eric Duncan had recently traveled to Texas from African when he made his initial visit to the hospital's emergency room on the night of Sept. 25-26. Berdan also says that the hospital's Ebola training and education programs had not been fully deployed at the time of Duncan's visit.

"In short, despite our best intentions and skilled medical teams, we did not live up to the high standards that are the heart of our hospital's history, mission and commitment," Berdan said.

Berdan's letter comes one day after it was revealed that the hospital did not initially keep a watch list of workers who may have had contact with Duncan, and had asked nurses to take their own temperature and self-report symptoms of Ebola.

According to the Associated Press, Dallas County Judge Clay Jenkins only ordered the creation of a watch list on Oct. 12, the same day nurse Nina Pham tested positive for the disease, Hospital officials told potentially exposed hospital workers to stop seeing patients other than Pham.

But the next day, the Centers for Disease Control and Prevention allowed another nurse who cared for Duncan, Amber Vinson, to get on a plane in Ohio and fly to Dallas with a mild fever. She was later diagnosed with Ebola, and CDC Director Dr. Tom Frieden has conceded that she "should not have traveled on a commercial airline."

The inconsistent response by health officials in monitoring and limiting the movement of health workers has been one of the critical blunders in the Ebola outbreak. Friends and family who had contact with Duncan before he was hospitalized were confined to homes under armed guard, but nurses who handled his contagious bodily fluids were allowed to treat other patients, take mass transit and get on airplanes.

"I don't think the directions provided to people at first were as clear as they needed to be, and there have been changes in the instructions given to people over time," said Rep. Michael Burgess, R-Texas, a doctor who did his residency in Dallas.

Local health authorities have said repeatedly throughout the response that their guidance and direction can change.

"Please keep in mind the contact list is fluid, meaning people may fall off the list or new people may be added to the list depending on new information that could arise at any time on any given day," said Dallas County health department spokeswoman Erikka Neroes on Friday when asked how many people are even being monitored.

On Thursday, Jenkins announced stricter restrictions that require hospital staffers who had been potentially exposed to stay away from the public for 21 days and check their temperature twice a day, once in person with a public health worker. It was the first written order anyone being monitored has been asked to sign.

But even those medical agreements allow some wiggle room. For example, they say public transit isn't outright banned but "should be discussed with the public health authority."

Officials say 125 friends, family, doctors, nurses, technicians, ambulance drivers and others may have been exposed in the days before Duncan died. Since then, the two nurses have tested positive and at least 18 other people in Texas and Ohio have been identified as secondary contacts who also merit watching.

At first, the monitoring sounded relatively simple: track down the contacts, monitor them with least twice daily temperature records and test people who develop symptoms for Ebola. State officials would be in charge, working with the CDC and Dallas County authorities.

But for a time after Pham was diagnosed with Ebola, different hospital workers had different levels of monitoring, based in part on their exposure risk. Some self-reported their temperatures. Some continued to care for patients. Hospital spokesman Wendell Watson on Saturday referred all questions about the facility's monitoring practices to county officials.

The county moved Duncan's girlfriend, Louise Troh, her 13-year-old son, Duncan's nephew, and a family friend from their apartment to a guarded house in an undisclosed location, where a health official comes by twice a day and takes their temperatures. The unusual confinement order was imposed after the family failed to comply with a request not to leave their apartment, Jenkins said.

Pham and Vinson have been taken to medical centers with isolation units in Maryland and Atlanta. There are four such centers in the U.S.

At the National Institutes of Health medical center in Bethesda, Maryland, spokeswoman Amanda Fine says staff involved in caring for people with Ebola are given thermometers and instructions and must measure and submit body temperatures twice daily.

Taylor Wilson, a spokesman for the Nebraska isolation unit, which has also been treating Ebola patients, said that every time health care workers go into the unit, they must stop and take their temperature and other vital signs and log the results. They are also advised to keep an eye out for any symptoms.

He said that there are no restrictions on the staff's movements outside of work.

In Washington, President Barack Obama presided at a rare Saturday evening meeting of Cabinet officials and advisers on health and security to receive an update on domestic Ebola cases and the status of tracing, contacting and monitoring people who may have come into contact with Ebola patients in Dallas. The meeting included a discussion of broader steps to increase the preparedness of the nation's health sector, the White House said.