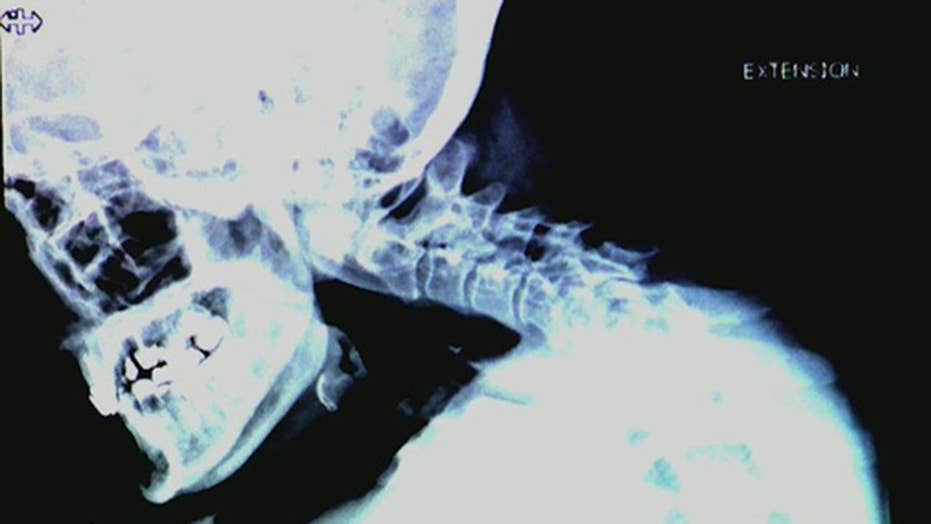 Mary Ann Rivers from Georgia beat cancer but the harsh side effects from radiation left her stooped over and struggling to breathe, a condition known as “chin-on-chest” deformity. Today, she has made remarkable strides in her recovery just three months after a life-saving, nine-hour surgery to correct her condition.

A Georgia woman who beat cancer only to have the harsh side effects of radiation leave her stooped over and struggling to breathe has made remarkable strides in her recovery just three months after a life-saving, nine-hour surgery.

Mary Ann Rivers, 68, said that her condition, which is referred to as a “chin-on-chest” deformity, even affected her driver’s license photo because she couldn’t look up at the camera, Fox 5 Atlanta reported.

“People would come and bend over to look at my face, which was kind of embarrassing too,” she said.

Rivers, who was struggling to breathe and swallow because of the curve in her neck, also has Parkinson’s disease, which made treatment options difficult to navigate because of potential recovery. Parkinson’s disease is a neurodegenerative disorder that affects dopamine-producing neurons in the brain. While symptoms may gradually develop over time, the progression is different from patient to patient.

MARIJUANA DETECTED IN MOTHER'S BREASTMILK DAYS AFTER POT USE

According to the Parkinson’s Foundation, there is no cure, but symptoms can be managed in a variety of ways. For Rivers, the complications involved her spine, and the type of healing and recovery that would need to take place after her surgery.

“The most important thing is we can get a lot of people through the surgery, but the follow-up and the healing down the line is extremely important,” Dr. Shashikant Patil, Rivers’ neurosurgeon, told Fox 5 Atlanta.

Patil and his team worked for nine hours to correct Rivers’ neck, with the surgery including bone grafts and rods to straighten her spine, the release of muscles pulling her head down and the fusing of 11 vertebrae.

“When he told me he could operate on me, I cried,” Rivers told Fox 5 Atlanta, of Patil. “He was kind of like my salvation.”

Three months later, Rivers is walking with the assistance of a walker and wears a neck brace, but she’s able to look straight ahead again.