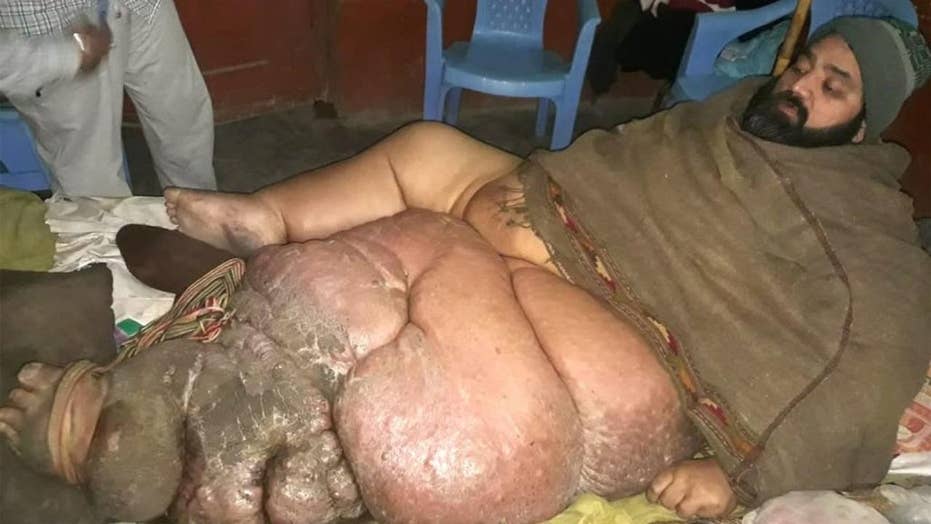 Pakistani butcher Muhammad Mushtaq is pleading for doctors to amputate his 330-pound leg, after being diagnosed with elephantiasis.

A butcher in Pakistan is pleading for doctors to amputate his 330-pound leg despite allegedly being told that the surgery could kill him. Muhammad Mushtaq, who said he first noticed a lump on his leg two years ago, is currently bedbound and was diagnosed with elephantiasis.

Elephantiasis is characterized by gross enlargement of an area of the body, typically involving the limbs, according to the National Organization for Rare Disorders (NORD). It can also affect the genitals, and is caused by the obstruction of the lymphatic system, which results in the accumulation of fluids. The main symptom is swelling with the skin of infected areas becoming ulcerated, pitted, dry and thickened.

Mushtag, 40, told Caters News Agency that he developed the condition as a result of a parasitic infection, and that it’s been “extremely painful” for him.

Mushtaq said surgeons told him amputation of the affected leg could kill him. (Caters News Agency)

“I am locked in my room the entire day and I need the help of six people to lift me because of my weight,” he told the news agency, according to Mirror.co.uk. “If there is no treatment that can save my leg that’s fine, I want my 21-stone leg amputated if that’s the case though.”

Mushtag said he’s taking his case to the government after a clinic in Lahore, Punjab, said the surgery would be too dangerous.

“They gave me medicines to treat fungal infection but said there was no way to treat the condition as the infection had reached the veins and I could lose blood in surgery,” he told Caters News Agency.

A neighbor who is a doctor is reportedly trying to help Mushtag see a specialist for a second opinion.

“We have heard of Professor Naushad from Civil Hospital in Karachi who treated a similar patient Essa Pallari,” Dr. Ruman-ul-Haq told Caters News Agency. “This has given Mohammed hope that we will find his treatment somewhere.”

Pallari had reportedly suffered from plexiform neurofibromatosis, which affects the growth and development of cell tissue. He reportedly couldn’t walk before surgery due to the massive growths on his legs, but has since recovered.