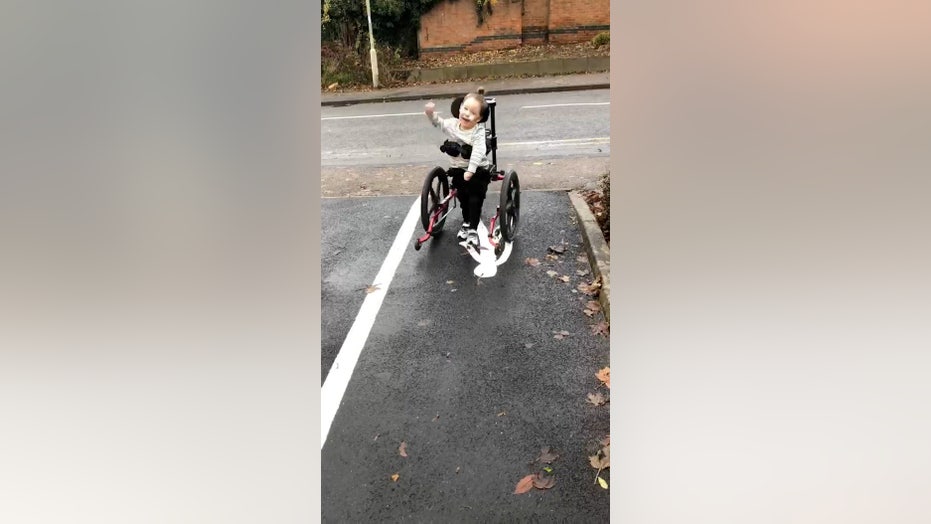 A 4-year-old boy in the U.K. whose parents were told he would likely never walk broke into a big grin as he took his first steps with the help of an assistive device into his preschool.

Bleu Greenwood, who was born with a severe form of cerebral palsy, had undergone months of intensive therapy after his parents saved for a life-changing operation this summer, reported South West News Service, a British news agency.

“It was so lovely and overwhelming to see because we never ever thought it would happen,” Rielle Chapple, the boy’s mother, told SWNS. “It just shows how determined he is and we are so proud of him.”

Bleu took his first steps with the help of an assistive device just months after undergoing a life-changing operation. (SWNS)

Bleu, whose twin sibling died in utero, wasn’t diagnosed until 4 months old, but his mother knew something was wrong just hours after his birth.

“Then when he was 10 days old, he started having seizures,” she told SWNS. “By the time he got to 4 months he wasn’t hitting any milestones and that’s when we got the diagnosis.”

Bleu’s case was classified as level 5, which according to CerebralPalsy.org means children will have severe head and trunk control limitations and require extensive use of assisted technology and physical assistance. Children with level 5 cerebral palsy will also be transported in a wheelchair.

Bleu, pictured with his mother, was never expected to walk after his diagnosis.  (SWNS)

Because of the severity of his case, Chapple, and the boy’s father, Dale Greenwood, were told their son wouldn’t walk even with surgery, SWNS reported. But the pair refused to doubt their son.

Five months after his surgery, Chapple, Greenwood and Bleu’s classmates and teachers watched as he walked while strapped into his assistive device into Wigston Menphys Nursery School in Leicester.