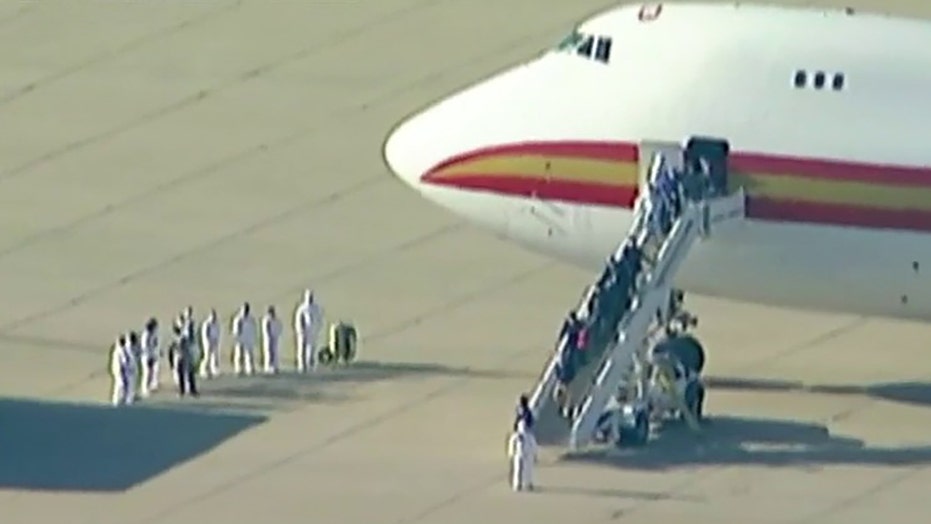 A child who was among the 195 American passengers evacuated from Wuhan, China was hospitalized after developing a fever, the Riverside County Department of Health announced; reaction and analysis from Fox News medical contributor Dr. Marc Siegel.

A baby born to a woman with the coronavirus tested positive for the illness 30 hours after birth, raising the possibility that pregnant women may be able to pass the virus onto their unborn children, Chinese doctors said.

The baby, who was born Feb. 2, is being treated at Wuhan Children Hospital and is in stable condition with no fever or cough, but had experienced shortness of breath. Chest X-rays showed signs of infection and liver abnormalities, Reuters reported.

“This reminds us to pay attention to mother-to-child being a possible route of coronavirus transmission,” Zeng Lingkong, chief physician of Wuhan Children’s Hospital’s neonatal medicine department told state broadcaster CCTV, according to Reuters.

The illness has sickened over 24,000 people worldwide and killed at least 490. Wuhan is considered the virus epicenter, and 99 percent of the cases have occurred in mainland China. Two deaths have been reported outside the country, including one in Hong Kong and another in the Philippines.

Lingkong said the two cases confirm that infants are also at risk of contracting the virus. Earlier this week, photos of a medical team at Harbin Sixth People’s Hospital in Heilongjiang who helped deliver the baby of a coronavirus patient emerged as staffers posed in their hazmat gear alongside the newborn.

The woman, who was not identified, went into labor on Jan. 30 after being diagnosed with the virus. She reportedly had close contact with relatives who had recently returned from Wuhan before her diagnosis. Doctors delivered her child via caesarian section and said that the newborn was born healthy and had so far tested negative for the virus.

It is known that the coronavirus may spread through respiratory droplets, but a new report suggests that it may also transmit through the digestive tract, specifically the fecal-oral route.

Scientists from the Renmin Hospital of Wuhan University and the Wuhan Institute of Virology of the Chinese Academy of Science discovered “virus genetic material” in stool samples and rectal swabs taken from patients, according to Chinese state media.