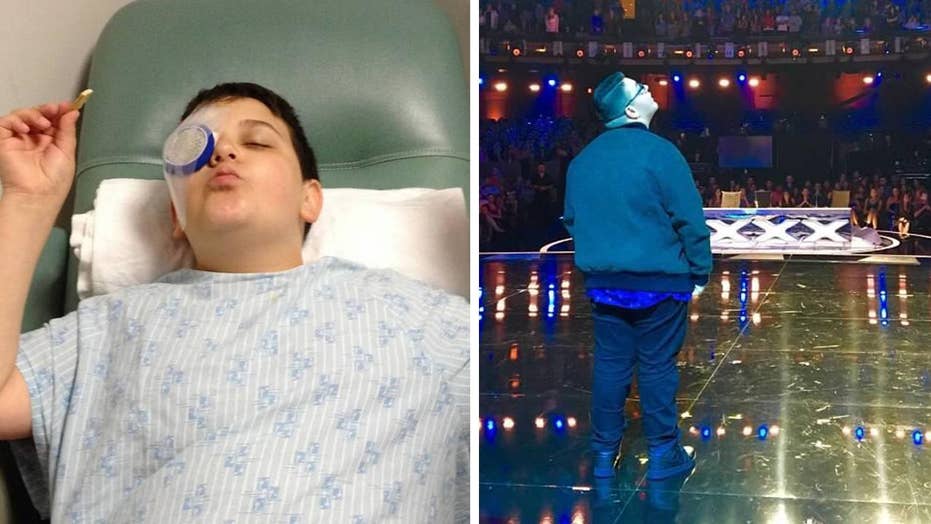 Born blind, Christian Guardino given the gift of sight and becomes popular singer

Christian Guardnio was born with an eye disease that caused him to go blind. But with a new gene therapy developed by Dr. Jean Bennett and Dr. Albert Maguire, Christian was given his sight back and has since received the golden buzzer on 'America's Got Talent' and created new music with country music star Hunter Hayes.

"I once was lost, but now am found, was blind but now I see.”

"Amazing Grace" is a song we've all heard and likely sang at some point in our lives, but a young man from Long Island, N.Y., has given the song lyric a literal meaning.

SEE IT: TICK LODGES ITSELF ON MAN'S EYEBALL

According to the U.S. National Library of Medicine, Leber congenital amaurosis (LCA) is an eye disorder that primarily affects the retina. People with this disorder typically have severe visual impairment beginning at infancy.

“Growing up it was always hard for me to see anything, so that vision that I did have, I had to really work to use it," Christian, 19, told Fox News of living with the condition. "I remember growing up and not being able to do as many things as everyone else was able to do… They’d be playing all these games and all I remember is sitting with my parents by a light inside the house," he said.

36 NURSES AT SAME HOSPITAL ALL HAVE DUE DATES WITHIN 2019

When Christian was 12, his family noticed a drastic decline in his vision, and he was told he'd be completely blind within a few years. Looking for answers, Christian’s mother, Elizabeth Guardino, found an LCA support group on Facebook, through which Christian and his family were invited to an LCA conference in Philadelphia.

Christian was later tested at Children's Hospital of Philadelphia, where he met Dr. Jean Bennett for the first time.

Dr. Bennett is a professor at the University of Pennsylvania, who, along with her husband Dr. Albert Maguire, has developed a type of gene therapy that can be used to treat LCA. According to Dr. Bennett, “there are between 600 and 1,000 people with this condition" in the U.S., and "probably more like 10,000," worldwide.

"Whatever vision they have at birth slowly deteriorates because it is a degenerative disease as well, so the cells in the retina die off over time.”

Dr. Jean Bennett, left, was working on a type of gene therapy for Christian's condition when he and his family met her at the Children's Hospital of Philadelphia. (The Guardino family)

Christian was eventually found to have a defect in his RPE65 (Retina Epithelium Kilodalton) gene, which helps with a protein necessary for the visual cycle — and Dr. Bennett still remembers the moment she discovered Christian had this gene defect.

“I remember running over to the clinic and telling them," Bennet said. "And that was a stunning moment because we had already initiated the phase-3 clinical trial and this was an opportunity for Christian to participate.”

After the therapy, Christian gained most of his sight back. He returns for follow-up treatment annually and says everything is — literally — looking good.

"I have been able to see such incredible things since the gene therapy, like the moon, the stars, the sunsets, fireworks, snow falling — just so many things that I have had the opportunity to witness. And I can’t take any of those things for granted."

"I have been able to see such incredible things since the gene therapy, like the moon, the stars, the sunsets, fireworks, snow falling — just so many things that I have had the opportunity to witness. And I can’t take any of those things for granted."

After being granted the miracle of sight, Christian used his newfound vision to chase his dream of becoming a singer. He landed his first stage debut at the Apollo Theaters’ “Amateur Night” show, and from there, he made his way to “America’s Got Talent,” where he was given the golden buzzer by Howie Mandel.

“When Howie hit that golden buzzer the first thing that went through my mind was, 'What?' I look up and see all of the confetti just coming down, I reached up and I grabbed a piece of it.”

Since “America’s Got Talent,” Christian has started releasing original music. His latest song, “Waiting,” is a collaboration with country music star Hunter Hayes.

“One of the first things he said to me was, 'So I heard you have something you have been working on?’ I was like, 'Oh you did, huh?'” After that, Christian took out his phone and started singing, with Hunter playing along on guitar.

Guardino now says he wants people to feel and experience something different in his music, and he hopes that he can continue to help people with LCA see the light again.

"I remember waking up right from that surgery, that first surgery, I woke up and I already noticed a difference," Christian explained to Fox News. "I remember seeing my mom and dad’s face for the first time in very clear detail, and actually being able to see what they look like … Words can’t describe that experience.”