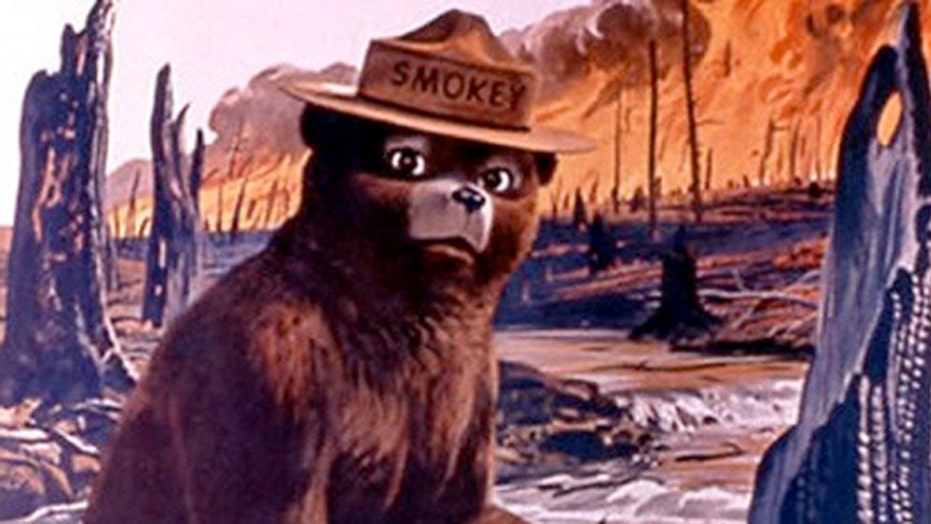 Governor Gavin Newsom and former Governor Arnold Schwarzenegger tour an Air Force base for a firsthand look at new equipment and technology to help Cal Fire beef up its wildfire response teams.

On Friday, the legendary mascot of the U.S. Forest Service officially turns 75 years old — though you’d never guess his age from that bear-y handsome face.

The mascot was “born” on Aug. 9, 1944, when the Forest Service and Ad Council teamed up to create a fictional character to promote fire prevention safety and awareness.

CLIMBER FALLS TO DEATH FROM MATTERHORN IN SWITZERLAND; GUIDES SAY MOUNTAIN ‘TOO DANGEROUS’

"The Forest Service wanted, you know, something strong," Wendy Melillo, a professor at American University, told NPR. "But it wanted it animated to be appealing ... to children and families. And so the first Smokey is a really sweet looking bear with a pair of jeans on and he's holding a bucket of water and he's pouring it over the campfire."

As times evolved so did Smokey, who picked up a must-have shovel along the way and has since been illustrated with emotions ranging from playful to powerful, serious to sweet.

According to Melillio, at one point in time Smokey even had his own ZIP code for fans to send letters, with "the occasional pot of honey” finding its way into the mail.

In 1950, following a blaze in the Capitan Mountains, firefighters in New Mexico found a cub with severely burned paws and hind legs. They named the cub “Smokey Bear” after New York Assistant Fire Chief, "Smokey" Joe Martin, and the cub accepted a life in the spotlight of public duties and service.

As times evolved so did Smokey, who picked up a must-have shovel along the way and has since been illustrated with emotions ranging from playful to powerful, from serious to sweet. (iStock)

Sixteen years later, the bear passed away, with his remains buried in what is now Smokey Bear Historical Park in Capitan — not far from where he was first found.

In honor of the milestone birthday, Smokey Bear even shared a favorite recipe for decadent s’mores cake — no campfire required for assembly.

The happy occasion arrives as some scientists argue that the world's forests are vulnerable amid climate change.

According to a study published in February 2017 in the Proceedings of the National Academy of Sciences , 84 percent of the blazes that firefighters were called to fight in the U.S. between 1992 and 2012 were ignited by people.